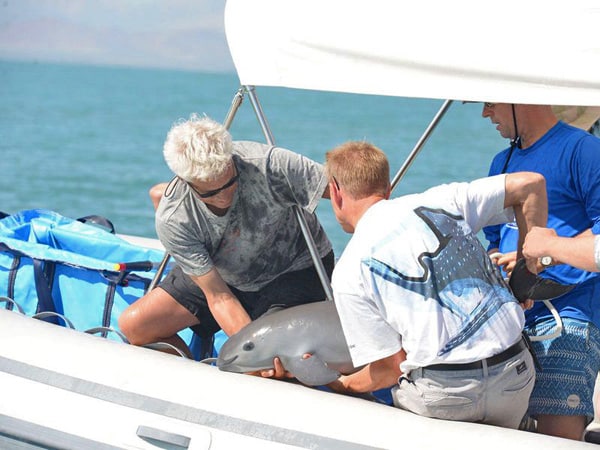 The smallest cetacean in the world is also one of the most critically endangered. With less than 19 individuals in the wild, vaquita populations have suffered over the years due to increased gillnet fishing in their Gulf of California home.

A recent genomic study provides new hope for the small vaquita population. The study suggests that the remaining population may have the genetic diversity necessary to support population recovery if existing fishing laws are followed and enforced.

Late on a fall evening in 2017, Phillip Morin, a marine mammal geneticist at the National Oceanic and Atmospheric Administration (NOAA) Southwest Fisheries Science Center, pulled off the San Diego freeway into a dimly lit parking lot. As he turned off the ignition, a figure stepped out of the shadows. He handed her an unassuming cooler box, completing a crucial handover—the final step in a sequence of events that was triggered by a tragic death in Mexico only 24 hours prior.

In Mexico’s Gulf of California, a vaquita, one of an estimated 30 remaining at the time, had died during a last-ditch effort to save the species—the most critically endangered marine mammal in the world. With persistent illegal fishing taking its toll on the surviving population, conservationists had no option but to try to bring as many of the remaining animals as possible into captivity close to their sole habitat in the upper reaches of the gulf.

A floating sea pen, purpose-built to provide a safe haven for vaquita, was stationed in the shallow waters off the coast. The first animal, a juvenile female, showed signs of stress upon capture and was released back into the wild. The second, an adult female, calmly investigated her new surroundings, but later became stressed and, despite valiant efforts by veterinarians and cetacean care experts, suffered cardiac failure.

“It ripped your heart out,” says Barbara Taylor, marine mammal conservation geneticist at the Southwest Fisheries Science Center. The loss of the adult female signaled the end of the captivity program—the risk of losing another vaquita was too great. But she did not die in vain.

The grief-stricken team performed a necropsy through the night and collected tissue samples, packing them securely in a cooler box. As the morning light spread over the Mexican coastal town of San Felipe, a van carrying the live vaquita cells sped through the desert toward the U.S. border.

Now, an international team of researchers, in collaboration with the Vertebrate Genomes Project, has used her living cells to generate the most complete high-quality genome sequence of any dolphin, porpoise or whale. The genomic analysis, published in Molecular Ecology Resources in October, reignites hope for the fast-disappearing species. It confirms that the small remaining population is genetically healthy and can still recover if authorities enforce existing conservation measures.