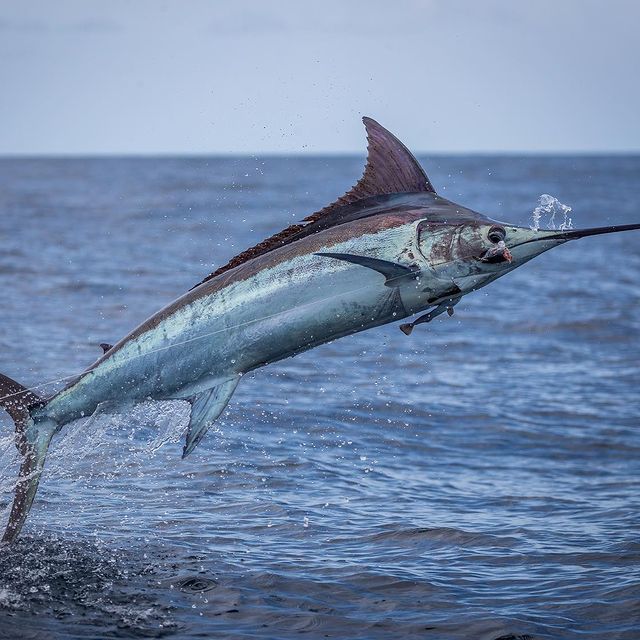 Atlantic blue marlin (Makaira nigricans) is a fish with an unmistakable bill and a high, pointed dorsal fin. They are an extremely quick species and found throughout the Atlantic Ocean. It isn’t uncommon for them to travel major distances, from one ocean to another.

Keep reading to learn some interesting facts about the Atlantic blue marlin.

#1: The Atlantic blue marlin is a favorite among anglers.

The Atlantic blue marlin is one of the ocean’s fastest and strongest fish, and they are a real favorite of sport fishermen! This attraction to sport fishermen can have negative effects on this species, however. Programs like The Billfish Foundation’s Tag and Release Program allow anglers to enjoy sport fishing while also aiding in the conservation of this special sport fishery.

Atlantic blue marlin eat a variety of fish found in varying depths of the ocean, including tuna, mackerel and squid. One way they catch their prey is by darting through bait balls while thrashing their heads, injuring and stunning the fish in the process, so they can be easily picked off by the marlin during a second pass.

The Atlantic blue marlin is an honored fish species by some countries, including The Bahamas. The country has made it their national fish, and it is even featured on their coat of arms and $100 bill. 🇧🇸

#4: Where to find an Atlantic blue marlin

The best place to find an Atlantic blue marlin is in deep offshore waters, also known as “bluewater.” Still, you may get lucky and spot one while it is hunting in nearshore surface waters. They are highly migratory, traveling vast distances to follow warm ocean currents and schools of fish.

#5: The Atlantic blue marlin has the need for speed.

Atlantic blue marlin can swim extremely fast. While their maximum swimming speed is not yet known, their close relative the black marlin has taken the prize for fastest fish in the ocean, observed reaching speeds up to 80 mph! They use this speed to catch prey when charging bill first into a bait ball.

#6: What feeds on Atlantic blue marlins?

#7: How big can the Atlantic blue marlin get?

In many species of fish, the females grow larger and live longer than their male counterparts, and this is no different for the Atlantic blue marlin. They can grow to be 12 feet long and weigh up to 2,000 pounds, making them the largest species of bony fish. The average lifespans for females and males are 27 and 18 years, respectively.

#8: The Atlantic blue marlin is definitely adapted for hunting.

What makes Atlantic blue marlins such fierce predators is a specialized blood vessel structure in their heads that allows them to keep their their brains and eyes warm. This rete mirabile, latin for “wonderful net,” is a network of concentrated blood vessels utilizing countercurrent exchange to increase the temperature in these areas. Having this adaptation allows them to think quickly and see more clearly when hunting, which gives them a major advantage over their prey.

Unfortunately for the Atlantic blue marlin, their populations are declining as a result of being mistakenly caught as bycatch in commercial tuna and swordfish fisheries. You can do your part to help conserve these amazing fish by taking part in The Billfish Foundation’s Tag and Release Program, choosing sustainably sourced seafood and protecting the marine environment they call home.