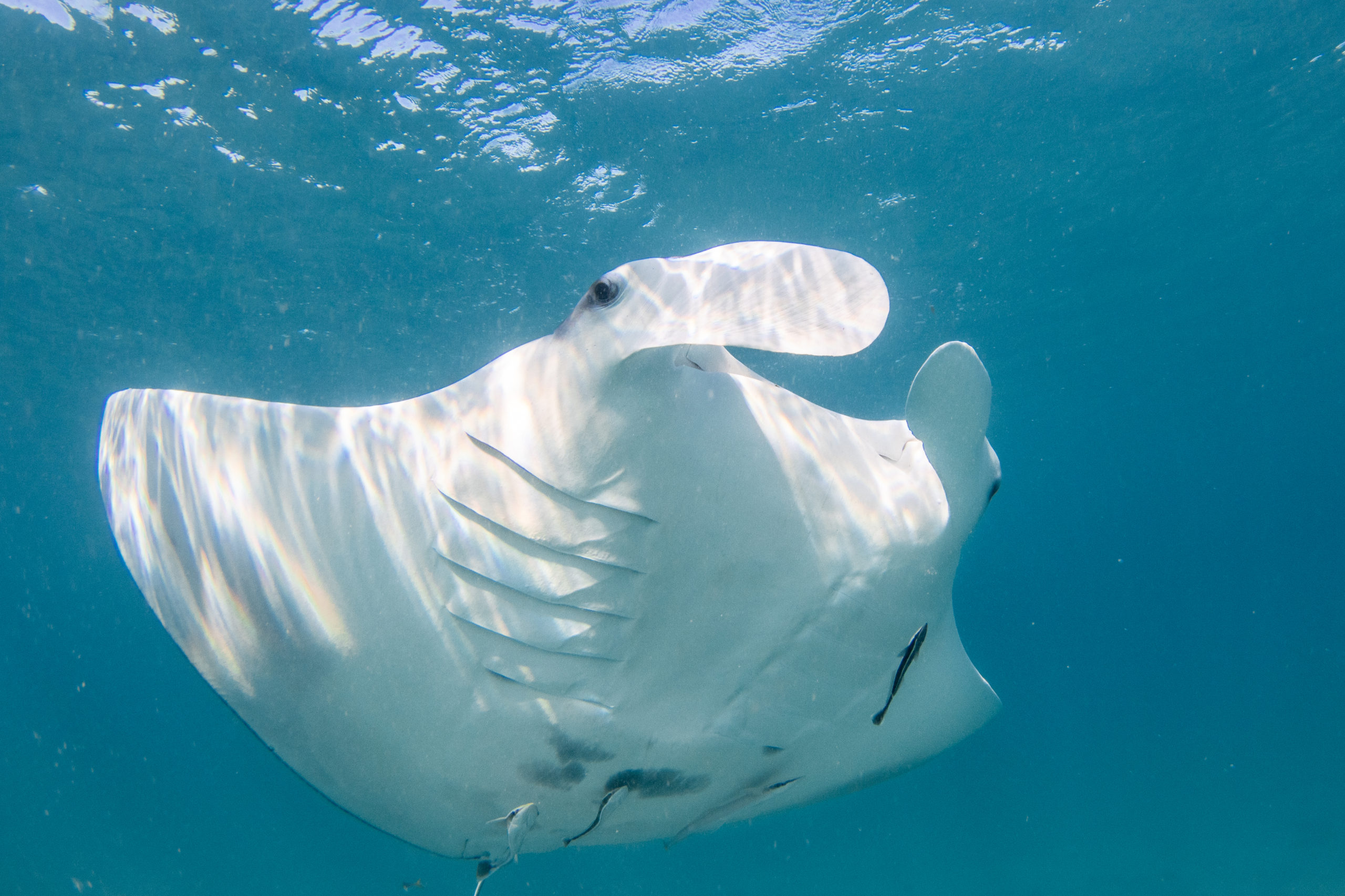 The elegant cartilaginous fish known as the giant manta ray (Mobula birostris) is easily recognized as it glides through the ocean by its horn-shaped fins and diamond-shaped body.

Here are some of our favorite facts about this amazing species.

The giant manta ray is the largest of all rays found in the ocean. They can weigh up to 5,300 pounds and have a wingspan reaching up to 29 feet, which is around the size of a school bus! Scientists have discovered they have the largest brain-to-size ratio of any cold-blooded fish.1

#2: Where can you find giant manta rays?

Giant manta rays migrate vast distances throughout the world’s tropical, subtropical and temperate waters. They spend time in both the open ocean and coastal waters and are drawn to each by the food sources found there.

Although mainly solitary animals, the Machalilla National Park and the Galapagos Marine Reserve in Ecuador are thought to be home to the largest populations of giant manta rays, which congregate in these areas to feed.

Florida has its own special population of giant manta rays. It is home to a large seasonal aggregation of mantas and also serves as an important manta ray nursery. Take a look at our 3D model of a giant manta ray, created in collaboration with Florida Manta Project and Digital Life.

Even though these rays are very large, they feed on some of the smallest animals in the ocean – zooplankton! Zooplankton are often microscopic and grow no bigger than 0.2 inches. These small aquatic organisms cannot swim against currents and drift with water movement. When manta rays come across zooplankton, they use their two large cephalic fins to direct water and food into their mouths where gill rakers filter that tasty zooplankton out of the water.

#4: Cleanliness is important to the giant manta ray.

In a well-documented symbiotic relationship, giant manta rays visit cleaning stations where they let cleaner fish remove dead skin and parasites from their bodies. To keep from sinking and to stay in one place while being cleaned, manta rays will swim into the oncoming current.

Giant manta rays are known to migrate and congregate seasonally at specific locations. This may be due to:

#6: Giant manta rays look like they are having fun with their food.

While feeding, giant manta rays can be seen performing barrel rolls as it allows them to maximize their food intake and engulf as much zooplankton as possible in a single pass. Feeding can also be social, and several mantas are often spotted feeding in the same area.

#7: Can you identify an individual manta ray?

Just like humans’ identifiable fingerprints, each giant manta ray has a unique pattern of spots on its underside. These patterns help scientists identify and track individual manta rays and better understand their behaviors.

Unfortunately giant manta rays face threats from targeted fisheries for their gill rakers and can also end up as commercial bycatch. This, combined with the fact that they reach sexual maturity late in life and only give birth to a single offspring every few years, means that manta ray populations are declining faster than they can reproduce. The IUCN has recently classified them as endangered.