The tiger shark (Galeocerda cuvier) is mainly a solitary animal found in tropical and temperate waters with unmistakably identifiable by the dark stripes running down their bodies.

Want to learn more about the mighty tiger shark?

Tiger sharks eat a variety of things, including sea turtles, sea birds, dolphins, rays and crustaceans. They are also nicknamed “the ocean’s garbage can” because they have been known to eat non-food items like plastic, metal objects, rubber tires and other random things they have come across in the ocean!

Tiger sharks are named for those distinct vertical bars that run down their bodies, which replicate a tiger’s stripes. Juvenile tiger sharks have dark spots and stripes, which fade as they progress into adulthood. Even though they may fade with age, a tiger shark never loses its stripes.

#3: Tigers and tiger sharks have more than a name in common.

Not only do tiger sharks share their stripes with a tiger, but they also share the same hunting method. Once they have spotted their prey, they slowly stalk it as they get closer and closer. The shark remains undetected to its prey because of this slow approach and their camouflage – just like tigers! Once ready to attack, a sudden burst of energy often results in a successful hunt.

Just a short boat ride away from Florida is Tiger Beach in The Bahamas! This famous site is considered one of the best places in the western hemisphere to dive with tiger sharks and is thought to be important for tiger shark reproduction as a high number of pregnant female tiger sharks have been observed in the area. This sandy location on the edge of the Little Bahama Bank is also home to nurse sharks, lemon sharks, Caribbean reef sharks and even great hammerhead sharks.

Tiger shark teeth are designed differently than other sharks teeth. First, tiger sharks have a far larger mouth than other sharks and 48 identical teeth across both their upper and lower jaws, which allow them to cut and grip onto prey using both jaws. This tooth structure is incredibly beneficial as they are the only shark species to eat hard shelled animals, like sea turtles, in addition to a wide variety of fish, rays, marine mammals and even other sharks.

#6: Tiger sharks are also on the menu.

Tiger sharks are apex predators meaning they don’t have many natural predators. In fact one of the only known predators to this species are humans and killer whales. A killer whale is much larger in size and weight, which allows it to overpower the shark. Humans are also a threat because the sharks can be caught as bycatch in commercial fishing gear and are also hunted by some for their cartilage, skin and liver oil. 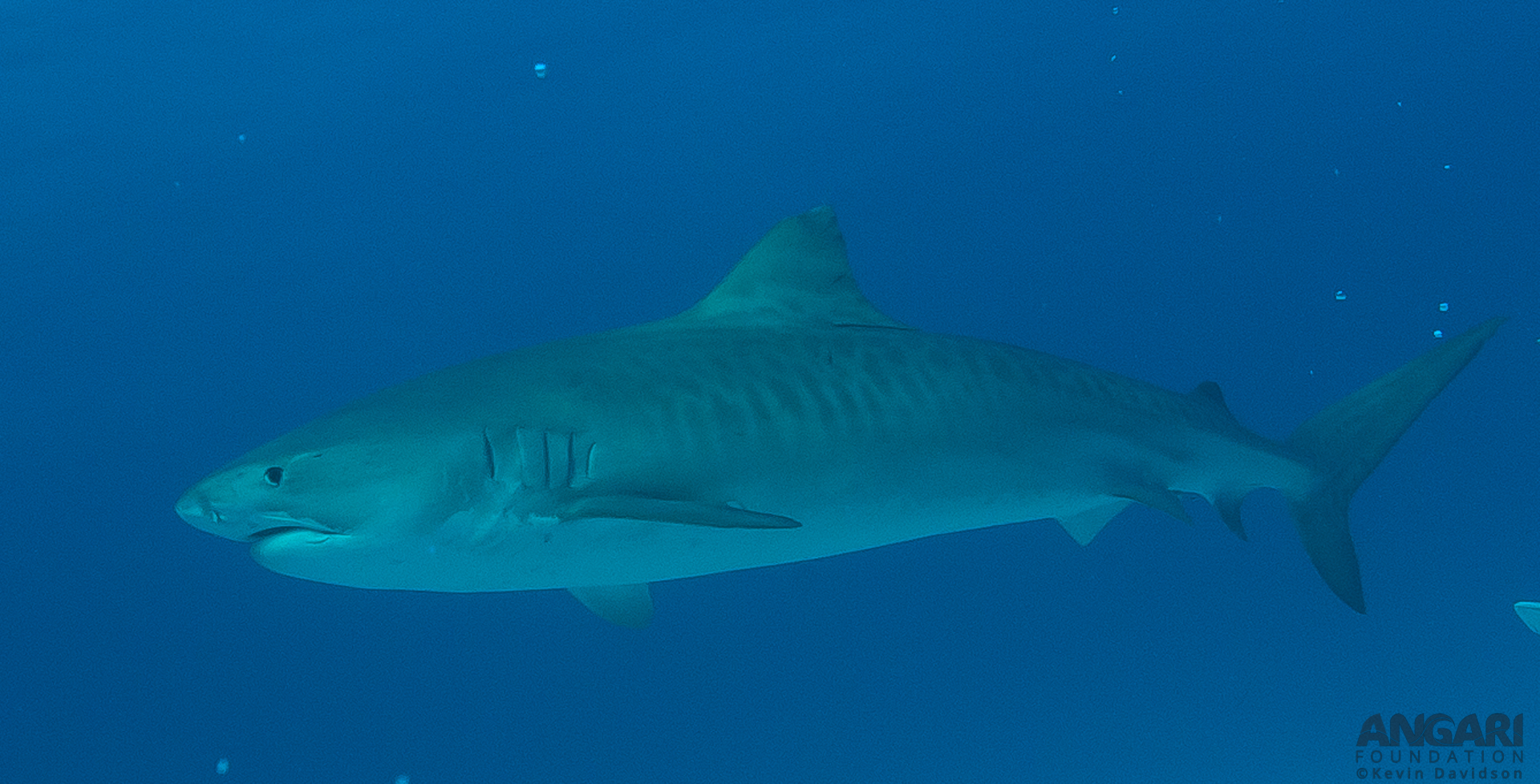 #7: Where can you find the tiger shark?

Tiger sharks can be found in a vast array of habitats across the globe. They migrate seasonally between tropical and temperate waters and call both the open ocean and shallow waters home. They are found near the surface and in deeper waters up to 350 metres. You are most likely run into them in coastal murky waters, such as harbors and inlets where land runoff provides habitats for their prey, and around coral atolls and lagoons.

#8: Reproduction of a tiger shark

Uniquely the tiger shark gives birth to live young, but unlike humans, they do not connect to their young through a placenta. After internal fertilization has taken place, the embryos develop inside the female as individual eggs. After 13-16 months and once the eggs have matured, they hatch inside the female, and she then gives birth to the live young.  A single female can birth up to 80 pups in one litter but on average they tend to birth between 30-35.

Tiger sharks are a remarkable species that sadly face the threat of being targeted by fisheries for their fins, skin and liver. Along with targeted fishing, they also face high mortality as bycatch. Both of these issues combined have led to the tiger shark being considered a near threatened species.

The shark research conducted aboard R/V ANGARI helps researchers better understand and protect shark species. By supporting ANGARI Foundation, learning as much as you can and sharing your knowledge with others, you can help conserve these magnificent and beautiful animals!