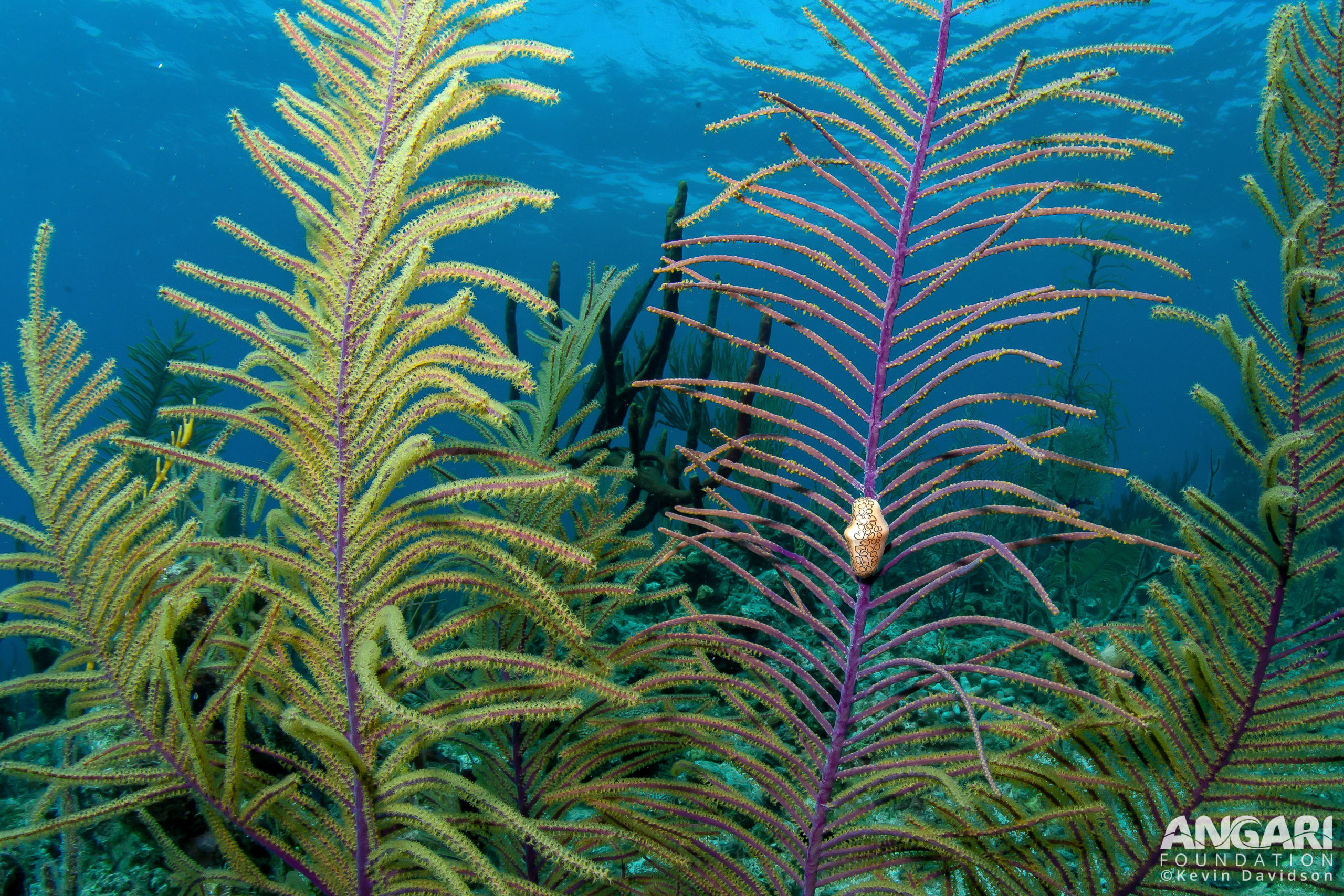 In this post we are getting up close and personal with the flamingo tongue snail (Cyphoma gibbosum). While only a few centimeters long, it stands out with its pink body and vibrant yellow-orange spots outlined in black. You might find one hanging out on a sea fan or whip coral in shallow tropical waters of the western Atlantic.

Although it is small, it is an amazing animal, so keep reading to learn more.

#1: Don’t ignore the warning signs of the flamingo tongue snail.

Flamingo tongue snails are able to incorporate toxins from their prey into their tissues to provide a potent chemical defense. Like many animals, these snails use bright colors to warn predators to stay away. This is called warning coloration or aposematism. Despite their best efforts, predators like lobster, hogfish and pufferfish still find them to be a tasty treat.

#2: Do flamingo tongue snails know when enough is enough?

The flamingo tongue snail is a foraging predator that specializes in eating soft corals like sea fans, whip corals and other gorgonians, like the one pictured below. Luckily they are smart enough to not graze their host to death. Instead, they transfer to a neighboring soft coral every few days, which allows the coral’s tissue to regenerate in time for the snail’s next visit. 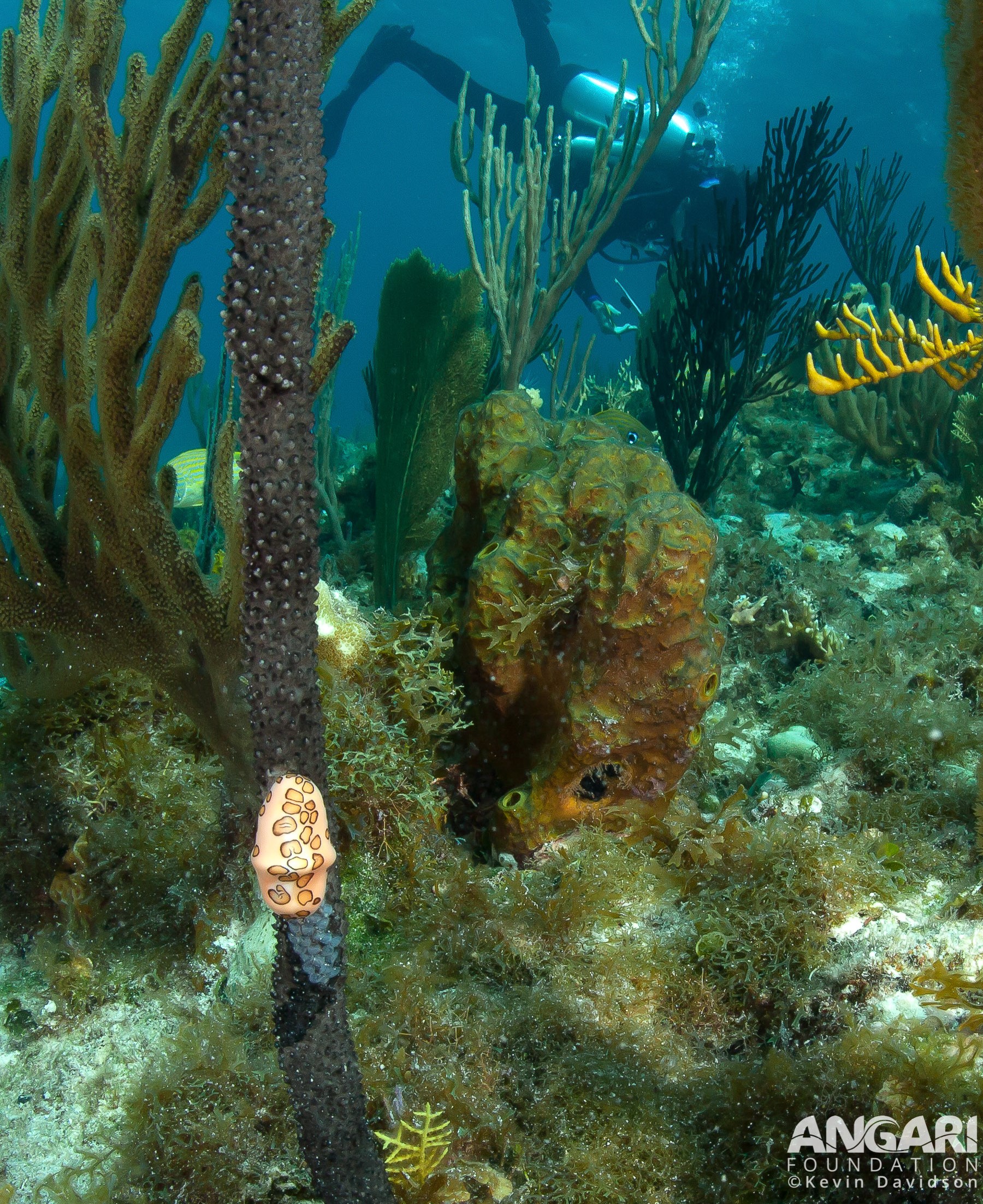 #3: What lies beneath the colorful patterns of the flamingo tongue snail?

Many are surprised to find the shell of a flamingo tongue snail is a tan-peach color. The bright pink, orange and yellow colors we are used to seeing are actually part of the snail’s mantle tissue, which covers the outside of the shell! The mantle is responsible for gas exchange and can be retracted when threatened.

#4: The flamingo tongue snail is a gastropod.

The flamingo tongue is a member of Gastropoda, which is a large taxonomic class that includes slugs and snails. Total diversity is estimated anywhere between 40,000 and 90,000 living species!1 This makes it one of the most diverse classes, second only to insects, in the phylogenetic tree.

#5: How does the flamingo tongue snail get around?

The flamingo tongue snail secretes a mucus to make it easier for its muscular foot to creep along the reef. The mucus has even been observed to act as a scent trail for other flamingo tongues to find food and mates!

#7: How does the flamingo tongue snail reproduce?

A male and female flamingo tongue can mate for up to four hours! Four days after mating, the female lays her eggs onto part of an exposed gorgonian skeleton. Each egg can contain up to 300 embryos! After ten days, the egg capsules hatch to release free-swimming larvae, which live and feed on plankton in the water column before settling onto the reef.

#8: What impacts the populations of flamingo tongue snails?

A 2007 research study by Burkepile & Hay2 found that when large predators of the flamingo tongue snail, like spiny lobster, large pufferfish, hogfish and others, were excluded from areas of a coral reef in the Florida Keys, flamingo tongue snail population density increased 19x compared to areas where predators were not excluded!2 As one might expect, this also led to gorgonians, a favorite food of flamingo tongue snails, experiencing 8x greater predation than normal.2

Overfishing of large predators could lead to overpopulation of flamingo tongue snails, resulting in overall decline in reef health. This is why it is important to advocate for sustainable fisheries management. Everything on a reef is connected.

These unique invertebrates are an important part of a healthy, balanced coral reef ecosystem. Unfortunately, some areas are facing population declines due to divers and snorkelers collecting live flamingo tongue snails, mistakenly thinking the bright colors are part of the shell. Truthfully, the only way to enjoy this snail’s beauty is to observe it alive!

This serves as an important reminder to never collect live organisms off the reef (which we already know you would never do).