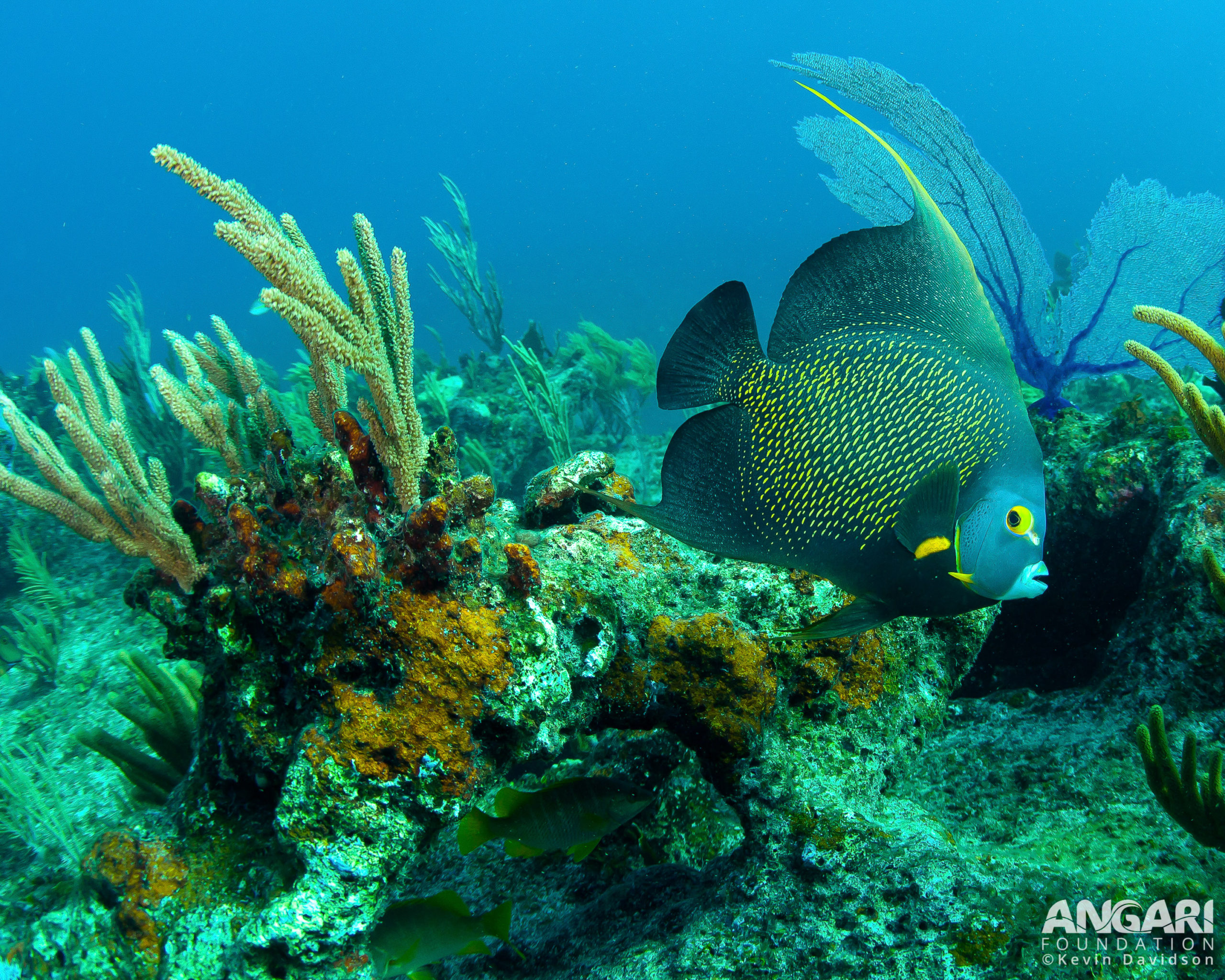 The French angelfish (Pomacanthus paru) can be found throughout the Caribbean and as far as New York, Brazil, the Gulf Coast and eastern Atlantic at Ascension Island and St. Paul’s Rocks. They typically dwell in shallow water on coral reefs and can be very curious, so keep your eyes open on your next snorkel!

Read on as we share fun facts about this truly angelic species!

#1: Don’t get the French angelfish confused!

The French angelfish is easily confused for its close relative and neighbor, the gray angelfish. They are especially hard to tell apart when you are in murky water. The French angelfish has a black body with scales edged in bright yellow, a rounded tail and yellow surrounding its eyes, as compared with the Gray angelfish whose body is gray with a square tail.

#2: What is the diet of a French angelfish?

Adult French angelfish eat algae and invertebrates like sponges, tunicates, corals, gorgonians and zoanthids! Like parrotfish, they play an important role in controlling the amount of algae on the reef and keeping a balanced ecosystem.

French angelfish are a diurnal species, meaning they are active during the day foraging for food and protecting their territory. At night they find a hidden spot to rest and hide from predators. 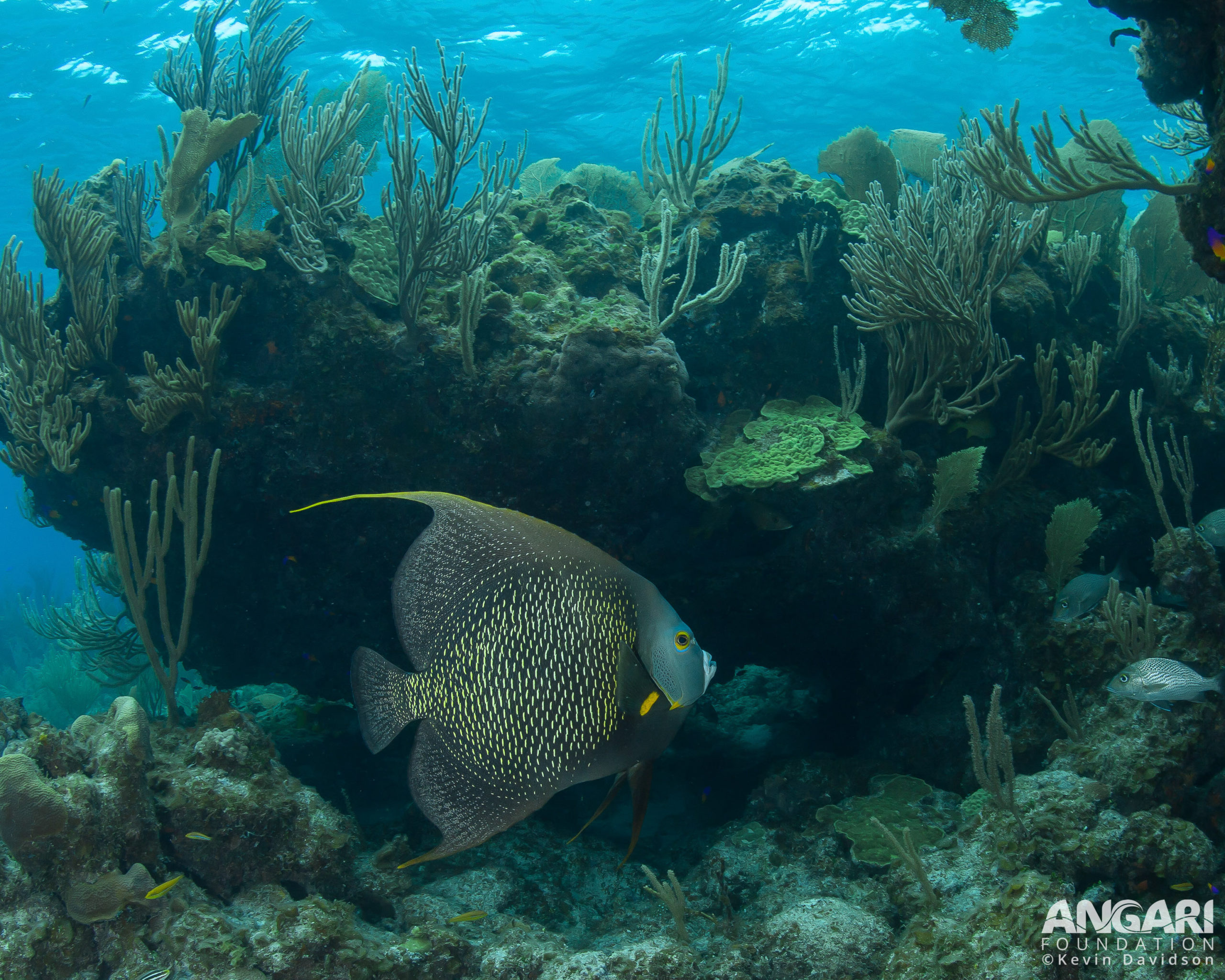 #5: Female French angelfish have the best of both worlds.

The female French angelfish can change their sex to male if no other males are present. This is called sequential hermaphroditism! Many fish species, like parrotfish and groupers, also do this to improve their chances for mating. 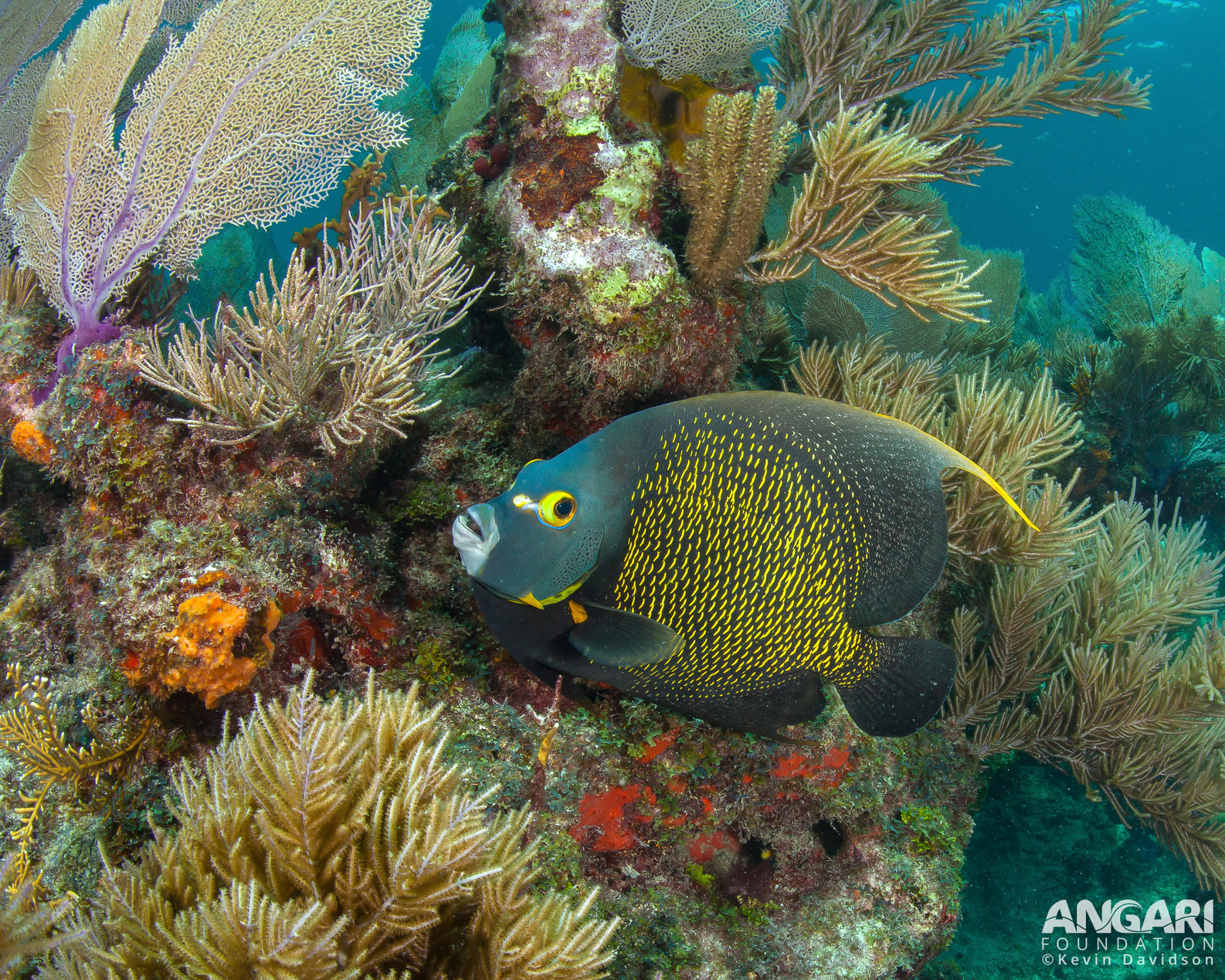 #6: How did the French angelfish get its name?

The French angelfish was first formally described by German naturalist Marcus Elieser Bloch as Chaetodon paru in 1787. The name paru was inspired by the Portuguese name for the fish. Scientists later reclassified the fish into the genus Pomacanthus to give us the name we use today, Pomacanthus paru! Every described species in the world has their own unique latin name that follows this system, known as binomial nomenclature.

Juvenile French angelfish like this one are known to set up ‘cleaning stations’ where they remove ectoparasites from a range of reef fishes, including jacks, snappers, morays, grunts, surgeonfishes and wrasses. To attract customers (and divers), they perform an eye-catching fluttering display. An association between organisms of two different species in which both benefit is called mutualism.

Sometimes the French angelfish can be found on the menu. While they are known to be a tasty choice in some countries, it is possible to get ciguatera fish poisoning from these pretty fish. This is an illness which causes nausea, vomiting and even neurological symptoms, such as itching and tingling in the extremities.

Since it is impossible to know if a fish is infected, the best way to protect yourself is to avoid eating large reef fish in excess. Larger fish, like angelfish, barracuda, grouper, and hogfish, often bioaccumulate toxins over time.

While French angelfish are designated as a species of least concern by the IUCN, we are still in danger of losing them along with their coral reef homes. Now is the perfect time to begin building sustainable habits to help save our reefs. You could:

➡️ Volunteer and become an advocate for the environment in your community
➡️ Contact local, regional, national, or international officials on how you would like to see environmental policy change
➡️ Support local conservation organizations
➡️ Choose sustainable seafood
➡️ Use reef-friendly products
➡️ Conserve water
➡️ Use less fertilizer and chemical agents
➡️ Practice safe boating by anchoring away from the reef and removing unwanted fishing gear from the ocean
➡️ Dive and snorkel responsibly! Keep your hands to yourself and off of the reef.