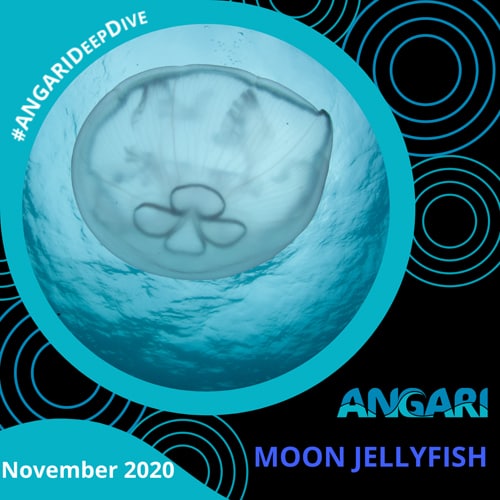 Growing up to 24 inches in diameter, these jellyfish are almost entirely translucent. Moon jellies aren’t strong swimmers and are only capable of limited motion so wind, waves and current often move them along and drive them near the coast. With this species living throughout the world’s oceans, you likely have come across one before! 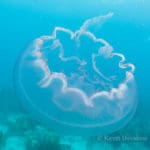 Today on November 3rd, we’re celebrating #WorldJellyfishDay. In honor of the occasion, let’s review a few quick fun facts about jellyfish. Did you know:

The anatomy of jellyfish is super unique 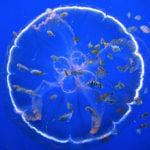 Moon jellies lack respiratory, excretory and circulatory systems. They have two kinds of skin tissues – an outer layer and an inner “stomach” layer. In the center, you can make out oral arms, which are actually projections of their stomach layer. These arms allow them to digest and absorb nutrients from food! What do you think jellyfish eat?

What do Moon Jellyfish Eat? 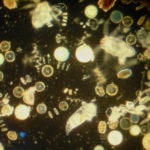 Moon jellies are carnivorous and feed on plankton in the water column. This includes larval mollusks, crustaceans, fish and tunicates, as well as rotifers, young polychaetes, protozoans, diatoms, fish eggs and other zooplankton. 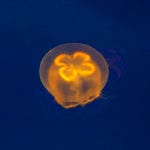 Moon jellyfish can be recognized by their four bright gonads located under the stomach. The gonads house sperm in males or eggs in females. In sexual reproduction males release sperm into the water, and females ingest the floating sperm to fertilize the eggs. The eggs are incubated within her arms until they form into a planula, or jellyfish larvae, and can be released into the water. The planula eventually settles on and attaches to a hard surface and changes into a polyp. The polyp may asexually reproduce and bud additional polyps, and then each polyp will eventually become an ephyra and swim away as a small jellyfish.  See the full jellyfish life cycle 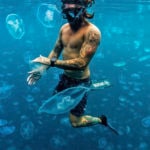 Unlike some jellyfish, the average size moon jellyfish are said not to deliver powerful stings to humans. The stinging cells on their tentacles, called nematocysts, usually feel more like a minor irritation or burn to a human if you get stung at all. There are exceptions for those with allergic reactions, or if you’re stung in a sensitive area or the jellyfish is very large. If you do get stung, the affected area should be rinsed with seawater and vinegar or baking soda to relieve the stinging sensation. Then first aid should be administered to the area. If you experience a severe reaction, you should seek medical assistance immediately.
📸: Solent News

Jellyfish are Not Fish 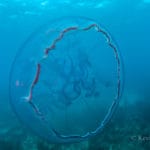 With a name like jellyfish, you’d think these animals are fish – nope!  Jellyfish are invertebrates and do not have a backbone like fish. Jellies are actually more closely related to corals, sea anemones, sea whips and hydrozoans.

Return to this post throughout the month to see more about the moon jellyfish and follow ANGARI and #ANGARIDeepDive on social media to see all the posts.