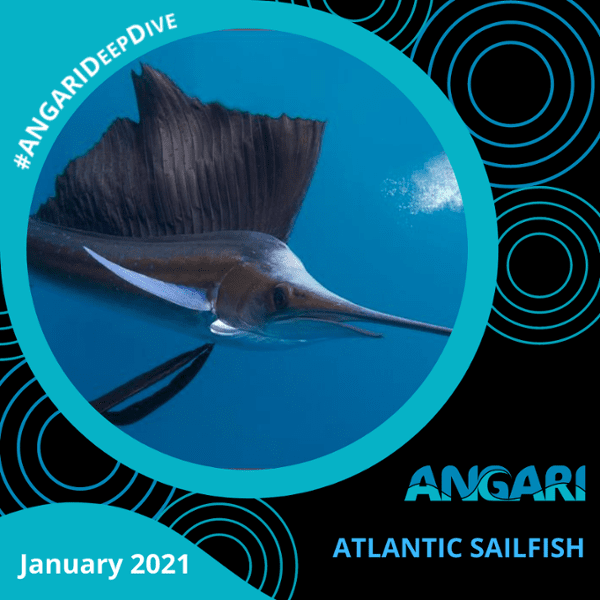 We’re starting the year off with one of the fastest fish in the ocean – the Atlantic sailfish (Istiophorus albicans). Sailfish species can grow up to 11 feet long and 220 lbs and are recognized for their large sail-like dorsal fin and pointed bill-like snout.

The spirited fight of the Atlantic sailfish makes the species a favorite among east-coast trophy fishers. Sailfish fishing in Florida is highly variable throughout the year, and they are found most often near the Gulf Stream. 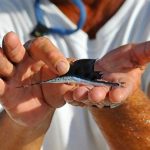 At hatching, larval Atlantic sailfish are only 0.125 inches, but as they quickly grow, their jaws begin to elongate, and at only 8 inches in length the juvenile sailfish has the same features as an adult. At 6 months, juveniles may weigh 6 lbs and be 4 ft long.

Atlantic sailfish can live for 13-15 years; however, sailfish caught and released by sport fishermen have an average lifespan of only 4-5 years. 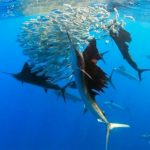 Sailfish live near the surface of the open ocean but will dive down >1000 ft to find food. These apex predators often drive schools of fish up from the deep for easier feeding and use their sails to herd bait balls. Squid, octopus and bony fishes are all on the menu. 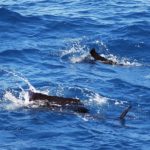 Atlantic Sailfish are a highly migratory species and have been known to travel as much as 200,000 miles in their lifetime. Many migrate south from New England and winter in Florida while others head to the Caribbean and take up temporary residence off the coast of South America before continuing on their annual journey toward the Yucatan. 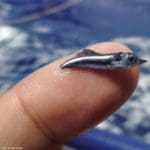 Sailfish have to deal with a wide variety of predators. When newly hatched, small sailfish larvae are preyed on by plankton eating fish. The size of their predators increases as they grow, and adult sailfish are hunted only by large open ocean predators like sharks, orcas and dolphinfish. 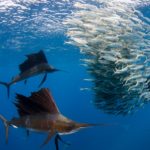 What’s with the sail? One theory suggests the sail serves as a cooling and heating system for the fish. The sail has a network of blood vessels and it will raise its sail at or near the surface before and after high-speed bursts.

Want to race a sailfish? They are built for speed & get up to 68mph! To reduce drag the #sailfish has a pair of grooves on each side of its body where it stores its fins while swimming & its tail fin act as hydrofoils. Off to the races!

What can you do to help? Save the #sailfish! There is very little known about juvenile billfish in their early stages of life. So The Billfish Foundation has a project to track them. They are asking that you supply a photo of juveniles that you’ve caught, an approximate location (including latitude & longitude) and any other information that you might have (time of day, weather conditions, size & condition of fish etc.). Send the photo and info to tag@billfish.org

Return to this post throughout the month to see more about the Atlantic sailfish and follow ANGARI and #ANGARIDeepDive on social media to see all the posts.