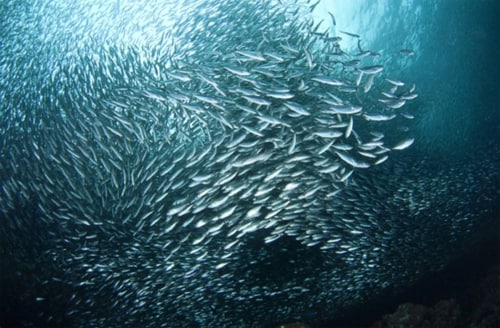 Are sardines smarter than we think? A new model shows that industrial fishing could promote anti-social fish behavior. Scientists from UC Santa Barbara, the Santa Fe Institute and the University of Washington suggest that modern fishing practices could change the schooling behavior of fish and decrease the tendency for fish to form large groups.

Life on Earth is all about strategies for survival, with every organism developing behaviors and bodies that maximize chances of staying alive and reproducing while minimizing the likelihood of being injured or eaten.

Fish are one such example. For millions of years, many species have evolved a safety-in-numbers strategy that confuses predators and ensures the survival of the maximum number of individuals as they move about in the ocean. According to scientists at UC Santa Barbara, the Santa Fe Institute and the University of Washington, however, thanks to modern industrial fishing practices and technologies, schooling behavior may become less common.

“The findings from our model suggest that industrial fishing can decrease the tendency of fish to form large groups,” said UCSB graduate student researcher Ana Sofia Guerra, lead author of a paper published in the journal Proceedings of the Royal Society B. This change in behavior has implications for both the fish and their predators, including humans.