(September 23, 2020) – Meet Nemesis, one of the many endangered great hammerhead sharks that spends her winters in Bimini, The Bahamas. In the last decade, the shallow sandy bank on the west side of Bimini has become a popular dive spot for people who want to experience the large apex predators up close. “Nemesis has been a frequent visitor for several years and is known by hundreds of divers worldwide, in thousands of photographs and even tattooed onto at least one customer’s arm,” says Bimini Scuba Center shark handler Sean Williams. “She is often the first to arrive and always stays until the end of the dives, whereas many other hammerheads come and go.” Visiting divers recognize her as one of the darkest colored hammerheads, probably due to the time she spends in the shallow, clear waters. She also has defining features like a notch in her second dorsal fin, unique ventral pattern with an identifying small single dot and the missing tip of her left pectoral fin, which she recently lost.

The great hammerhead shark called Nemesis has defining features like a unique ventral pattern with an identifying small single dot and the missing tip of her left pectoral fin. [Kevin Davidson, ANGARI Foundation]

Nemesis has made appearances on screen as well. She was on Blue Planet Live and more recently on a GoPro advertisement marking the release of the Hero 9 Black. While great hammerhead sharks rarely attack humans, society has had the opposite effect on the hammerhead shark populations. Hammerheads are heavily fished for their large fins, which are extremely valuable in the Asian markets. Due to overfishing, their populations have declined significantly worldwide, and hammerhead species have been listed as endangered globally by the IUCN. “Now, it is more important than ever to support wildlife conservation and preserve the heritage of life on Earth,” explains Duncan Irschick, Professor at UMass Amherst and Director of Digital Life. “By creating high quality 3D models of living organisms, we can share animals and their stories with the public.”

Irschick teamed up with the marine science nonprofit ANGARI Foundation and underwater camera pioneer Casey Sapp for a research expedition to Bimini with the goal of creating an accurate 3D model of a great hammerhead shark to share with scientists, educators and storytellers. ANGARI Foundation’s research vessel ANGARI spent several days on site where each day consisted of underwater camera setups and rigging, shark baiting and diving and video and photo capture. At the end of every day, the team reassessed the system and setup, making improvements for the next day. Several hammerheads visited the dive site during the week, but Nemesis stood out as the obvious choice for modeling.

On site, Casey Sapp used a multi-camera underwater system that allowed the team to capture photographs and video of Nemesis from different angles. Once back on dry land, the team then worked with CG artist Jeremy Bot, who pioneered novel software techniques to recreate the distinctive body shape of Nemesis in an accurate manner using the open-source software Blender, a process that took several months. The result was the only accurate 3D model of a great hammerhead shark, which will be an invaluable digital specimen for usage in 3D computational modeling approaches, studies of shark body condition and health and education. 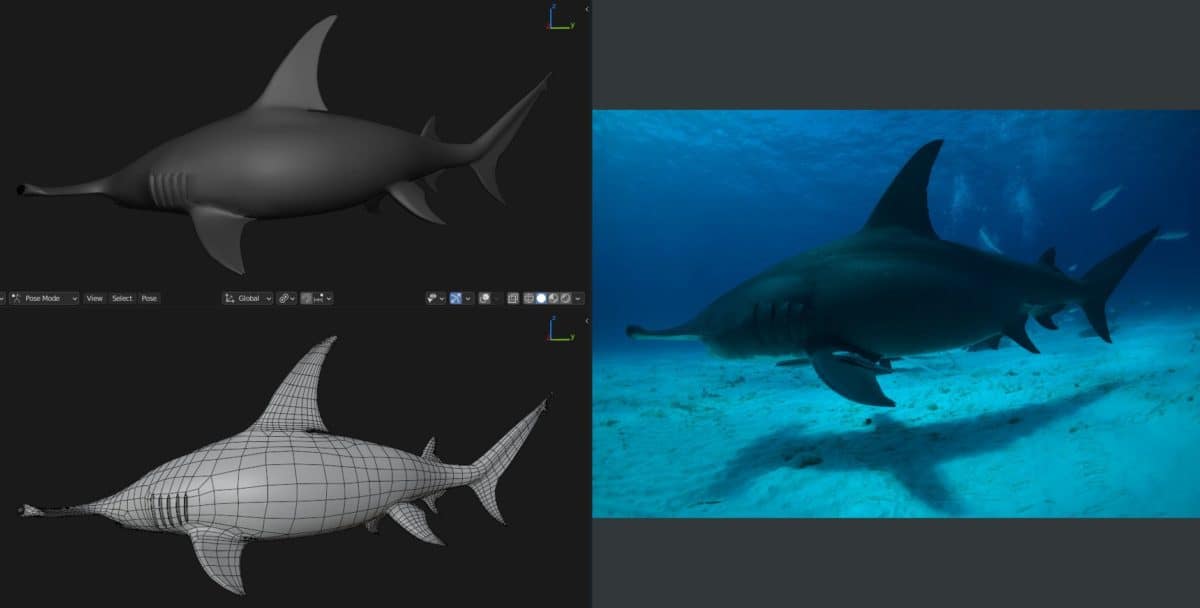 About ANGARI Foundation
ANGARI Foundation is a 501(c)(3) private operating foundation established in 2016 and headquartered in West Palm Beach, FL. The Foundation is dedicated to creating a global community that is interested, knowledgeable and invested in marine and environmental sciences by directly supporting research initiatives that foster a greater trust and dialogue between scientists and the public. ANGARI Foundation uses innovative technology, film and other media to raise awareness and strengthen science education. Many of the Foundation’s primary initiatives involve R/V ANGARI, a 65-foot vessel that serves as an exceptional research and education platform. For more information visit www.angari.org.

About Digital Life Project
The Digital Life Project (www.digitallife3d.org) aims to preserve the heritage of life on Earth through creating and sharing high-quality and accurate 3D models of living organisms. We aim to spur scientific discovery, support wildlife conservation and create educational opportunities.  The Digital Life project is a non-profit initiative within the University of Massachusetts at Amherst that creates digital 3D models of living organisms to support wildlife conservation, science and education. We are partnering with scientists, zoos, and NGOs to ethically gain access to a wide array of animals for 3D scanning, including endangered species. Utilizing the Beastcam™ technology, our team of photographers, engineers, modelers and scientists creates high-quality 3D models through photogrammetry – the integration of 2D images to create 3D models. Digital Life’s models are freely available online for public viewing and free downloads are available for creative and non-profit work.

The release of Nemesis has received significant social media and press coverage, including from the following news outlets:

The Bahamas (November 14, 2019) – Last month researchers from the Perry Institute for Marine…

On November 5th, 2017 ANGARI Foundation will be leading the first Lake Worth Lagoon Drift…