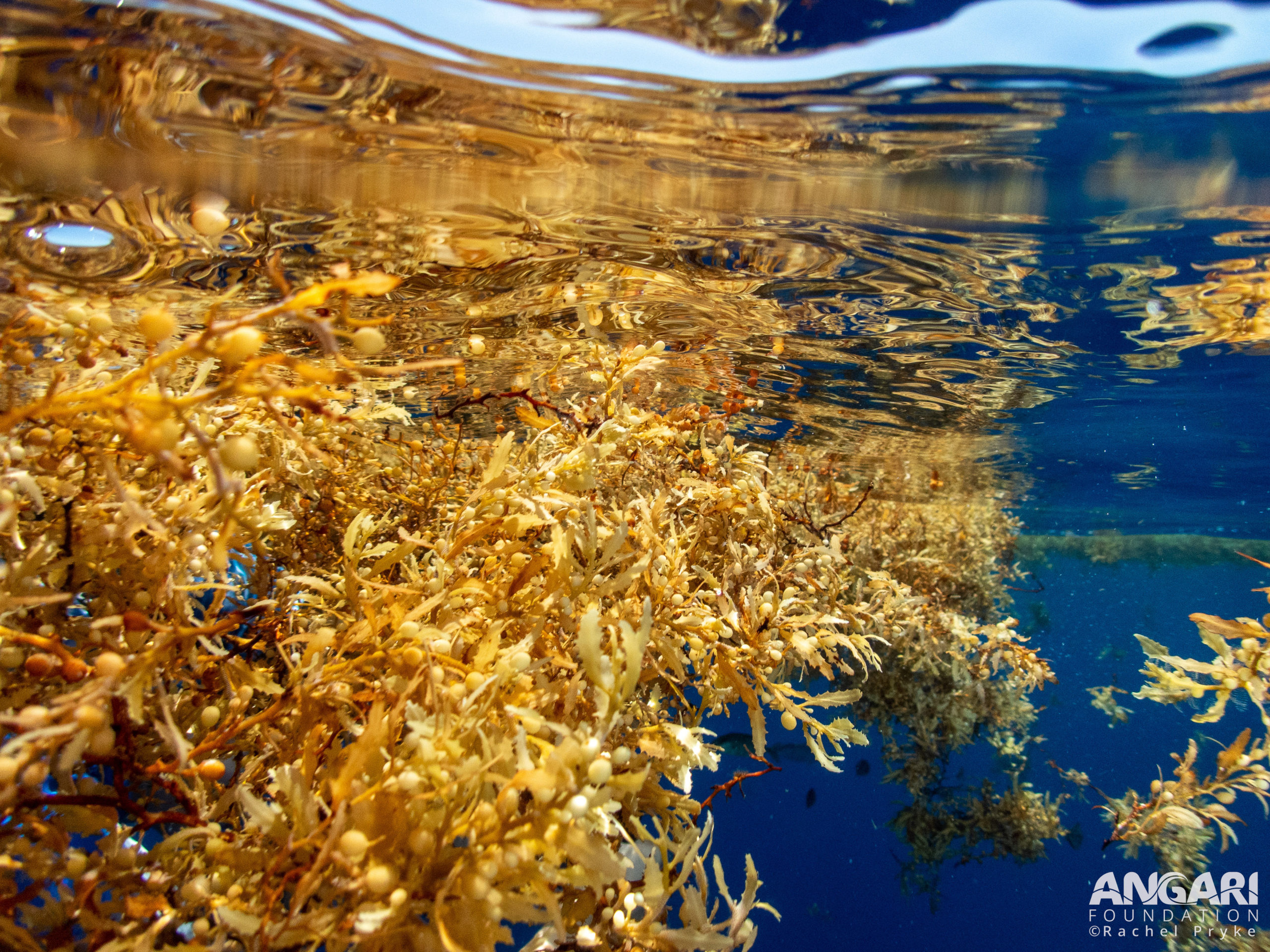 Have you ever seen Sargassum floating in the ocean, washed up on your local beach or just wondered where it comes from? With over 360 species of this floating algae found around the world, Sargassum fluitans and Sargassum natans are the dominant species in the Caribbean.

Have a read below as we take you through a few fascinating facts about the genus of Sargassum!

Sargassum is found throughout temperate and tropical oceans around the world. These floating ‘rafts’ are usually located around coral reefs and shallow waters and can be miles long. The largest ones are known to span more than 5,000 miles (8850 km)1 from the coast of West Africa to the Gulf of Mexico. This is famously known as the great Atlantic Sargassum belt and has been estimated to weigh over 20 million tons!1 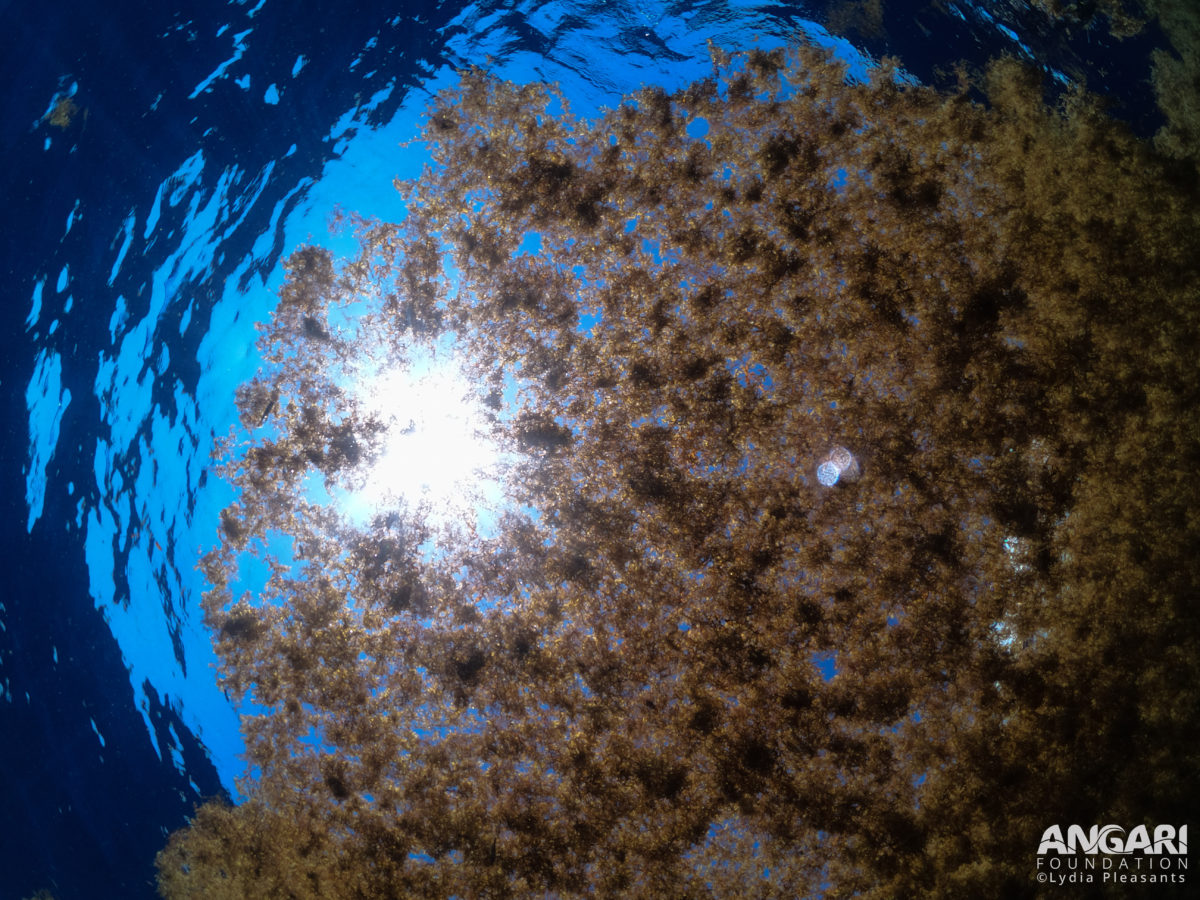 #2: Sargassum is an important habitat & nursery.

Did you know that Sargassum is an important habitat for marine life? As a free-floating habitat in the open ocean, it provides essential protection and food for vulnerable species like sea turtles, shrimp, crabs and fish. It is thought that young sea turtles spend the first few years of their lives living in Sargassum mats for this reason. Commercially important species such as tuna, mahi, amberjacks, wahoo and billfish also use Sargassum as a nursery habitat and then return as adults to feed. 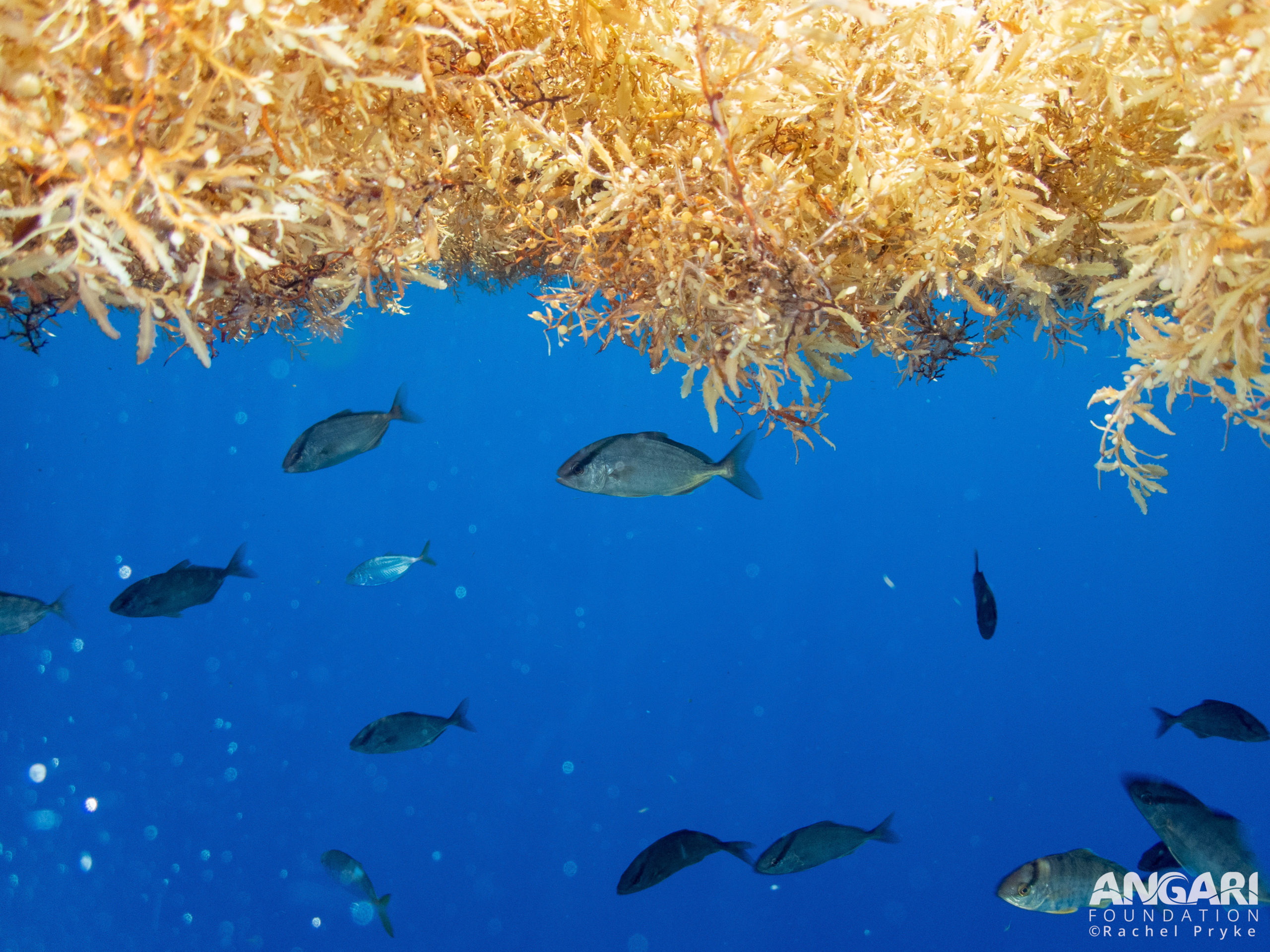 #3: Sargassum is a free-floating species.

Sargassum is a unique species, in that it is not rooted to the seafloor and grows by vegetative reproduction known as fragmentation, which is a form of asexual reproduction when smaller shoots break away from the main body. It can float due to air bladders called pneumatocysts that are filled with oxygen which makes them buoyant and when the pneumatocysts lose their air, the Sargassum will sink to the ocean floor, bringing with it nutrients like carbon. 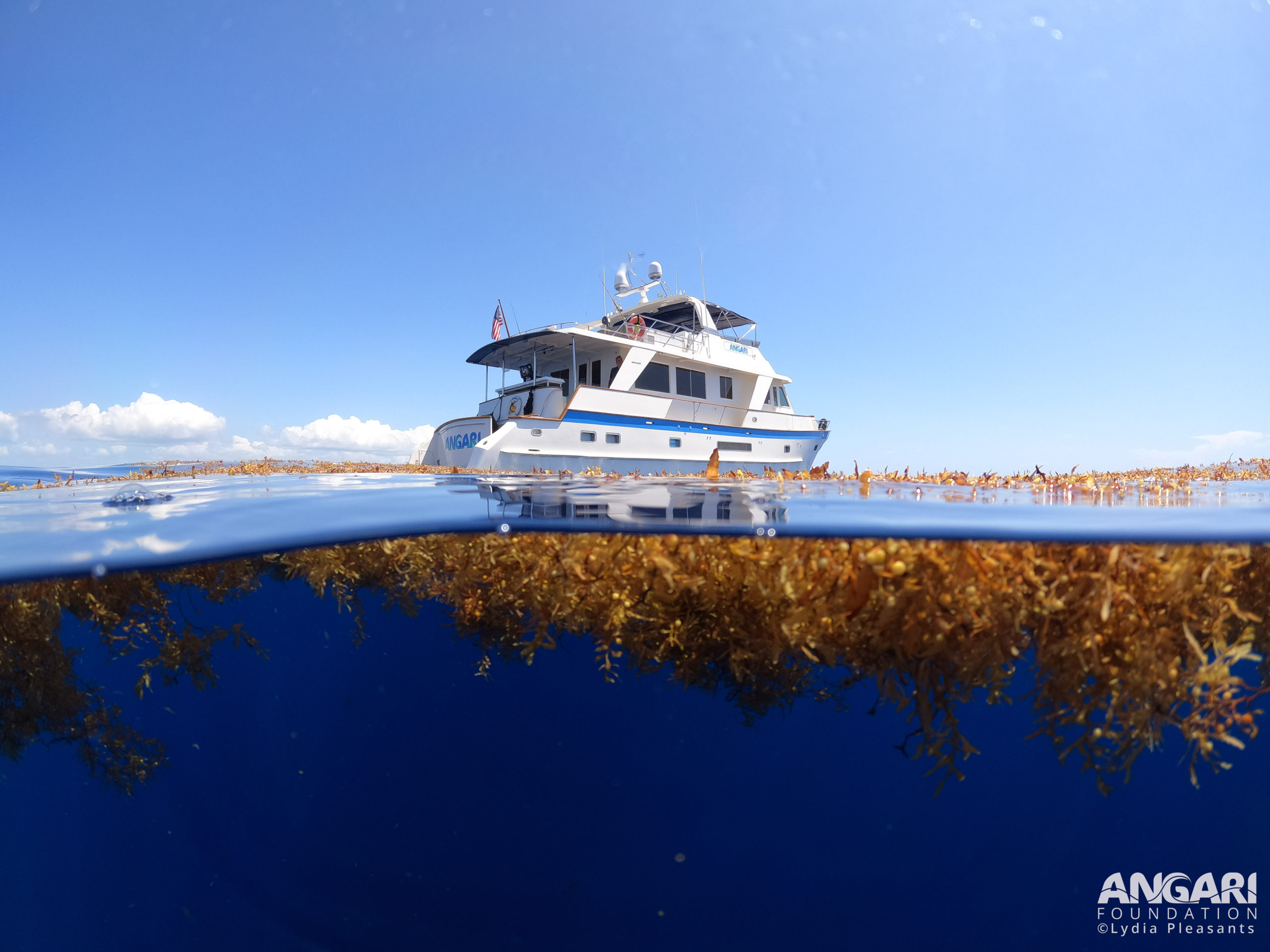 Nitrogen and phosphorus are naturally occurring nutrients in the ocean, but they can also be artificially added through agricultural and sewage runoff. Since 2011 huge blooms of Sargassum have been identified, which are fueled by these nutrients, where the Amazon, Congo and Mississippi Rivers discharge into the oceans. Although a critical habitat for marine life, these large blooms can create issues when they reach our coastlines by stranding marine life, blocking critical sunlight needed by sea grasses and coral reefs, as well as leading to a decline in tourism.

#5: Sargassum is a carbon sink.

Sargassum plays a critical role in stabilizing Atlantic and Caribbean ecosystems. Sargassum acts as a carbon sink by absorbing CO2 from the atmosphere and redistributing it. When Sargassum loses its buoyancy, it sinks to the seafloor, bringing with it organic carbon to inhabitants of the deep sea. It also provides stability and decreases the effects of erosion when it washes up on shore, as well as providing beach plants with nutrients. 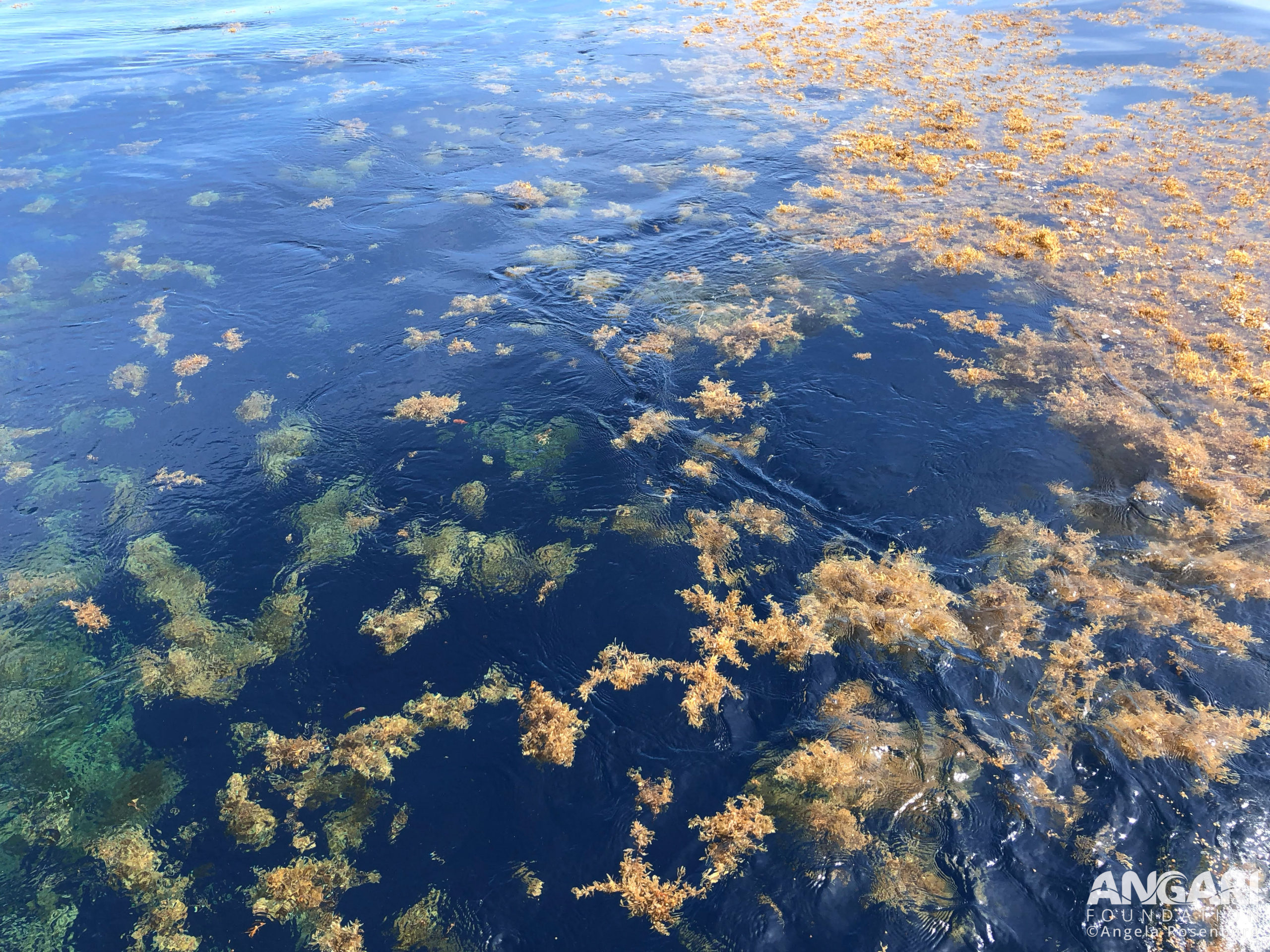 #6: Unique species can be found making their home in Sargassum.

Sargassum fish are in the frogfish family and are just one of the many species that have uniquely adapted to life in Sargassum mats. They have mottled yellow, green and brown colorings, which allows them full camouflage which they use when catching their such as prey, shrimp and small fish which also make their home in Sargassum.

#7: How Sargassum is monitored.

University of South Florida scientists have been studying the Great Atlantic Sargassum Belt using satellite imagery since 2000. They are able to monitor distribution and abundance of Sargassum, which can be used to learn more about ocean ecology, inform fishery management and forecast beaching events which can have major impacts on coastal ecosystems. This image from June 2022 shows that there will be large Sargassum blooms in the Gulf of Mexico and across the Caribbean.

Sargassum has been washing up more frequently since 2011 and coastal communities design creative ways to use this resource for good, such as Mexico uses it to create paper, fertilizer, biofuel and even cosmetic products. Other countries in the Caribbean have started creating building material from it to use in construction and in Florida people have started to use it as fertilizer for crops. 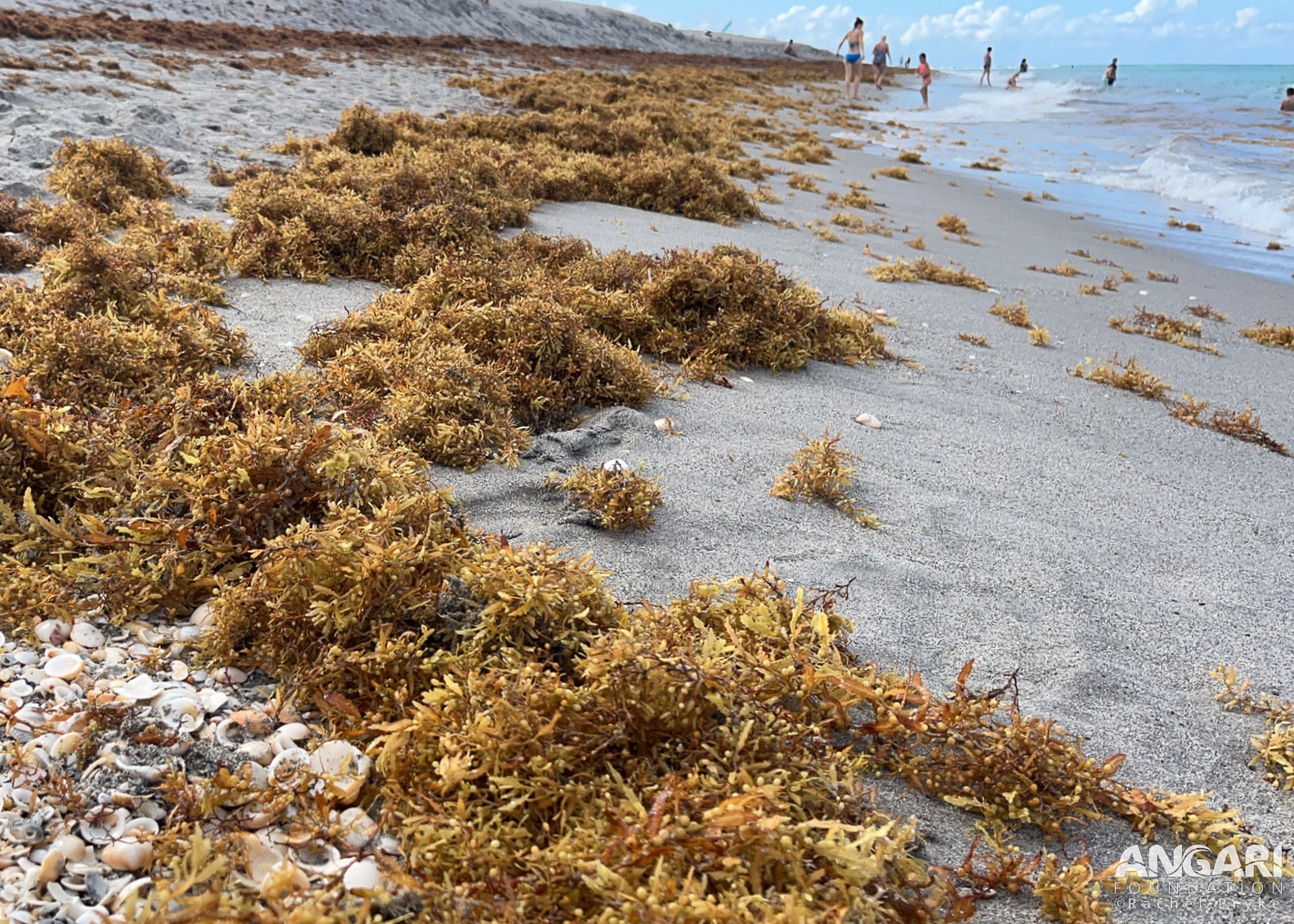 Sargassum is an important part of marine ecosystems, but too much of it can cause some adverse effects. We can do our part to help balance Sargassum levels by reducing use of fertilizers on our crops and mitigating global climate change, both of which are causing Sargassum to bloom in large numbers. With that in mind, we must also preserve this genus, especially in places like the Sargasso Sea, for the many species that rely on Sargassum for food and nursery habitat.

Additional Sargassum Resources:
1. Sargasso Sea Commission – The Sargasso Sea is named for the Sargassum seaweed that creates its unique ecosystem. This sea has been called a golden floating rainforest.
2. NOAA – What is Sargassum?

Christmas Tree Worm (Spirobranchus giganteus)
The Christmas tree worm is a species of polychaete marine worm that is most commonly associated with hard corals in shallow tropical coral reefs around the world.
Giant Barrel Sponge (Xestospongia muta)
The giant barrel sponge is the Caribbean’s most iconic massive reef invertebrate and can be found throughout the Caribbean Sea and the Gulf of Mexico.
Tiger Shark (Galeocerda cuvier)
The tiger shark is mainly a solitary animal found in tropical and temperate waters and is identifiable by the dark stripes running down their bodies.
© 2023 ANGARI Foundation Inc.
Back To Top