Expedition 37: SCTLD in The Bahamas

After missing 2020 reef surveys due to COVID-19, Perry Institute for Marine Science scientists were finally able to return to Grand Bahama Island and the Abaco island chain to assess reefs for signs of Stony Coral Tissue Loss Disease (SCTLD) infection and recovery.

After nearly a year and a half hiatus due to COVID-19, researchers from the Perry Institute for Marine Science (PIMS) returned to The Bahamas to survey reefs around Grand Bahama Island and the Abaco island chain to assess the spread of Stony Coral Tissue Loss Disease (SCTLD) on Bahamas reefs and the recovery of coral reefs post Hurricane Dorian.

During a 16-day expedition onboard R/V ANGARI that circumnavigated Grand Bahama Island and Abaco, 25 sites were surveyed under Atlantic and Gulf Rapid Reef Assessment (AGRRA) methods. Most of the sites had been previously surveyed during expeditions onboard R/V ANGARI in 2018 and 2019, at which time scientists had conducted baseline assessments of the condition of the reefs and examined the immediate effects Hurricane Dorian had on reef structure and health, respectively.

During the expedition, 98 benthic surveys, 59 coral surveys and 154 fish surveys were completed. Photogrammetry was also used at each site to create high resolution imaging of reefs for past and future comparison. Researchers used high quality cameras in underwater housings and commercial drones to collect imagery of the reefs from above. The tens of thousands of photos captured during the expedition will be processed and stitched together to create photomosaics of each site.

The initial post-expedition observations were promising. Some of the corals damaged by Hurricane Dorian showed signs of recovery. However, structural damage to these reefs is still quite apparent. Likewise, reefs that had been covered with fine mud and sediment during the storm are still covered. The presence and spread of SCTLD is incredibly worrisome for many reef building coral species who are affected by the fast-spreading disease with a high death rate. Fortunately, the presence of the disease was not observed in the northern Abacos. During the expedition, whenever SCTLD was observed on a reef, bilges and dive gear were decontaminated in order to avoid transporting the disease to unaffected reefs. The spread and long term effects of SCTLD among Bahamas reefs is a high environmental priority for The Bahamas and will continue to be regularly assessed and studied. If anyone observes signs of SCTLD anywhere in the Caribbean, please report it. 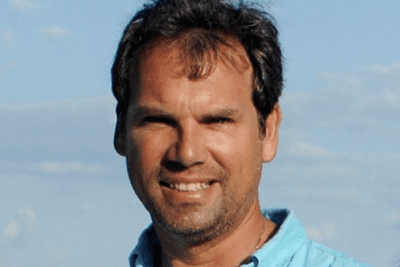 Dr. Craig Dahlgren, Director of Perry Institute for Marine Science, is a marine ecologist who studies a wide range of topics related to tropical marine ecosystems. His work includes studies of mangrove and coral reef ecosystems, efficacy of marine protected areas, and population dynamics of fishery species ranging from traditional Caribbean fishery species like Nassau grouper and Caribbean spiny lobster to emerging fisheries like sea cucumbers, parrotfish, sponges, and gorgonians. At present, his work focuses on improving management of and expanding the network of marine protected areas, restoring coral reef and mangrove ecosystems, and improving fishery management for traditional and emerging fishery species in The Bahamas and elsewhere.