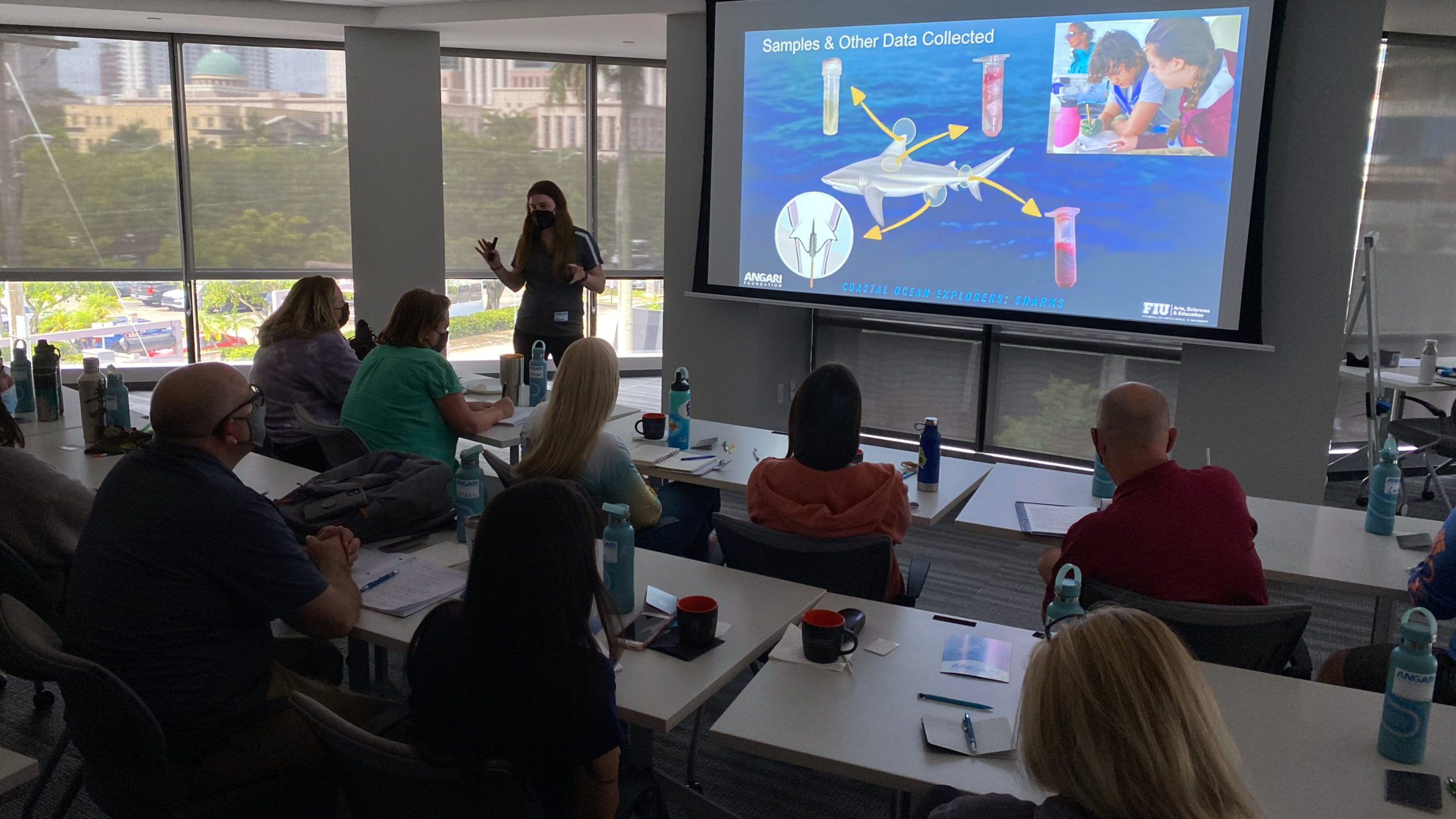 At the end of July, Florida teachers converged on ANGARI Foundation’s home port in West Palm Beach for an exciting opportunity to learn about and experience shark research firsthand. During this multi-day teacher-only workshop, educators were immersed in ANGARI Foundation’s Coastal Ocean Explorers (COE): Sharks program in collaboration with scientists from the Florida International University (FIU) College of Arts, Sciences & Education. The summer workshop was the first in what the program partners hope is many teacher-targeted offerings under the program.

The cohort of 23 participating teachers hailed from 20 elementary, middle and high schools across 9 Florida counties, including Broward, Flagler, Hillsborough, Manatee, Marion, Miami-Dade, Monroe, Palm Beach and Seminole. Day one of the workshop was shore-based and gave the teachers the opportunity to get to know each other and the program leads. After a welcome and overview from the ANGARI team, the current COE: Sharks Lead Scientist, Laura García Barcia, introduced participants to the diverse niches that sharks occupy, the important roles they play in the marine ecosystem and the common species found around Florida. She also shared the methods scientists employ to study sharks, including those the teachers would help the science party execute during the at-sea portion of the workshop. Laura discussed her work on shark toxicology, the incorporation of chemical pollutants into shark tissue and its implications for human consumption of shark. She shared her research on juvenile bull sharks in Florida’s Everglades and lessons and activities designed to help bring complex food webs involving juvenile bull sharks and the bioaccumulation of mercury in sharks to students in K-12 classrooms.

In the afternoon, the teachers heard from the incoming COE: Sharks Lead Scientist, Erin Spencer, about her shark research. In particular, they learned about the biologging technology and modeling tools she is using to study the motion and behavior of great hammerhead sharks. After further exploring the nature of Erin’s work and the types of datasets she is collecting, the teachers split into breakout groups to brainstorm ways that Erin’s research, and shark science in general, could be brought into their classrooms. The teachers, scientists and ANGARI team then reconvened to share these ideas and discuss future collaborations. Throughout the day, ANGARI Foundation and FIU also shared additional complementary resources, including 360 videos, 3D models, webinar series, lessons and more, that the teachers can use to support shark content integration with their students.

Over the two days that followed, the teachers were split into two groups that headed out to sea aboard R/V ANGARI with the COE: Sharks FIU Lead Scientists and research teams. After getting acquainted with the specialized fishing gear and tools they would be using, the teachers helped the scientists bait, assemble, deploy and recover drumlines to fish for sharks roughly one mile offshore Palm Beach County. During the July 23rd expedition, two great hammerhead sharks were caught, studied and released in good condition. Valuable data was collected from both sharks and the larger of the two was equipped with a biologging device that recorded data on the movement and activities of the shark post-release. On the July 24th expedition, two nurse sharks were caught and the teachers actively aided the scientists in collecting data and samples from these sharks during quick workups prior to release. With the support of ANGARI Foundation and FIU CASE scientists, the participating teachers will integrate lesson content directly tied to their COE: Sharks experience in their classrooms during the coming school year. Program collaborators also hope to welcome some of the participating teachers onboard R/V ANGARI once again for a COE: Sharks expedition with their students.

Those interested in learning more about the Coastal Ocean Explorers: Sharks program and/or applying for a youth expedition, are encouraged to visit the COE: Sharks website. Applications are currently open for youth (ages 12-18) expeditions during the 2022-2023 academic year and availability is limited. Educators interested in participating in a future workshop of this nature are encouraged to register as an educator with ANGARI Foundation. The registration process is free, only takes a few minutes, and ensures early notification and access to the Foundation’s future marine science opportunities for educators.

ANGARI Announces “Fuel Your Research” Initiative
ANGARI has supported Bahamas research since our inception but recent years have proven tough for researchers. We are excited to announce an amazing opportunity - our "Fuel Your Research" initiative, in support of marine science fieldwork in our home state of Florida.
8 Tips for an Ocean-Friendly Party
Here's some tips on how to throw a fun, festive event that has the well-being of our oceans and environment in mind.
Sharing Coastal Ocean Explorers: Sharks at the National Marine Educators Association 2022 Conference