The Christmas tree worm (Spirobranchus giganteus) is a species of polychaete marine worm that is most commonly associated with hard corals in shallow tropical coral reefs around the world.

Discover some fascinating facts about this species below.

#1: Don’t be fooled by the Christmas tree worm’s size.

Although they stand at an average height of just 1.5 inches, the Christmas tree worm is one of the more recognizable invertebrates on coral reefs because of their distinct shape and bright colors.

#2: The eye-catching appendages of the Christmas tree worm

Christmas tree worms get their name from the visible section seen protruding from their burrows. These eye-catching appendages, called crowns, come in a pair and are made up of feather-like radioles, a kind of tentacle. They are extremely important for the worm’s survival as they are used to filter feed particles and draw oxygen from the water.

Since Christmas tree worms are found living on shallow coral reefs, sunlight reaches them allowing the full spectrum of their colors to be visible. They can be seen in a variety of vibrant colors, including pink, red, yellow, brown, white and blue. Which color is your favorite?

The tree-like portion of a Christmas tree worm only makes up ⅓ of its body. The rest is hidden below in a tube bored into the live coral. These worms are primarily sedentary, meaning they don’t move after settling. 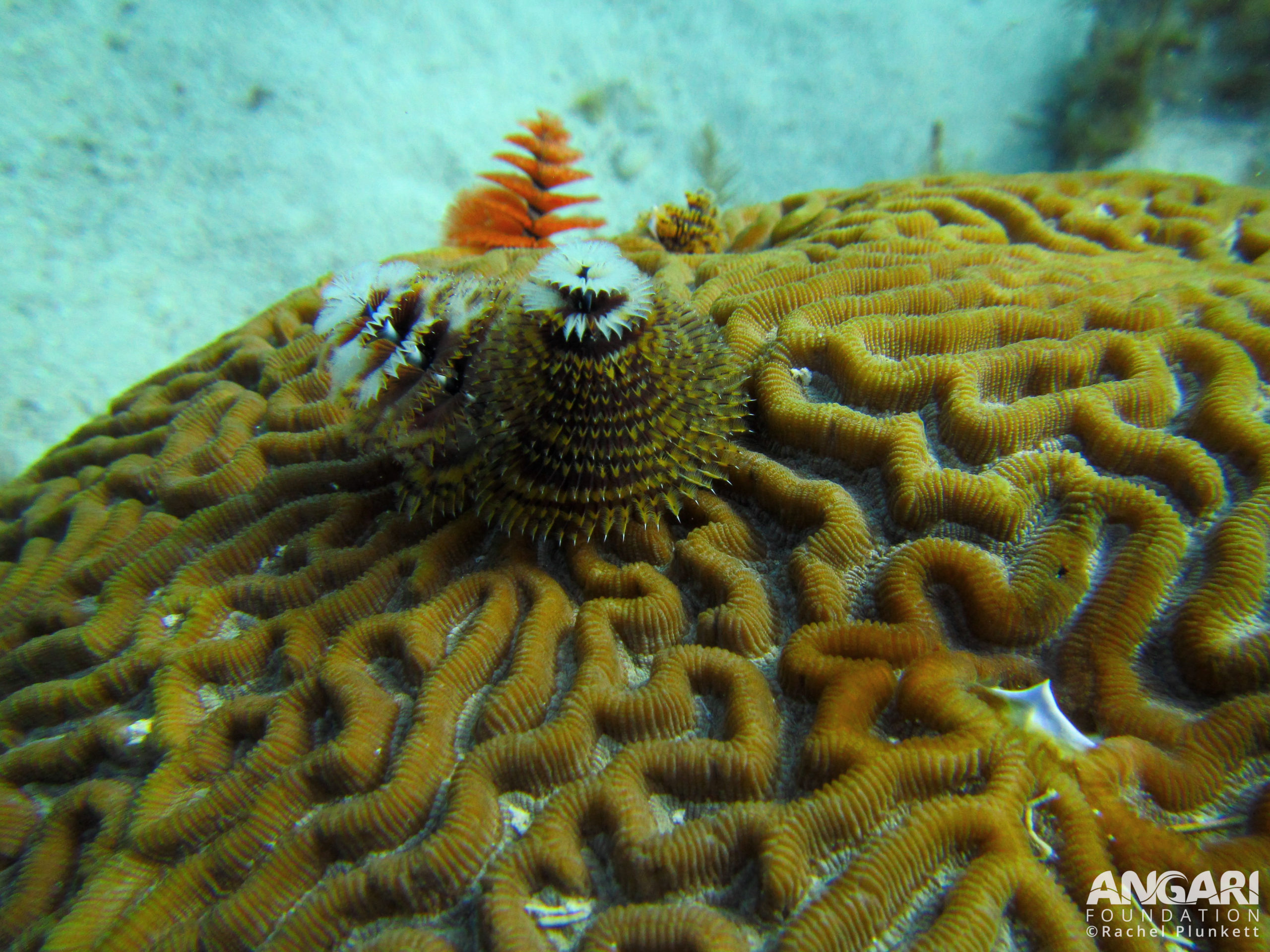 Christmas tree worms are filter feeders, which means they feed on particles passing by in the water column using the ‘hairs’ on their body. These ‘hairs’ are called cilia, which act like tiny bristles to create water currents that direct digestion of food. They mainly feed on microscopic plankton, but occasionally they will take in sand to use as building material to help anchor themselves into the coral. Talk about being resourceful!

#6: How do Christmas tree worms defend themselves?

At the first sign of danger the Christmas tree worm quickly retracts into its burrow and seals the entrance with their operculum. These worms are on the lookout for sea urchins, shrimp, crabs and reef fish. Once they think the coast is clear, they tentatively test the water and re-emerge to extend their colorful crowns.

Christmas tree worms reproduce through broadcast spawning, which is when both males and females release their reproductive material into the water column where fertilization then takes place. A fertilized egg only takes 24 hours to develop into larva, at which point it settles and begins burrowing into hard coral to create a tube to dwell in.

It has been believed that Christmas tree worms only associate with stony coral species, but this theory was challenged when two individuals were found living on a giant clam in the Gulf of Thailand. What an amazing discovery!

While Christmas tree worm populations are currently stable, the same cannot be said for the coral reefs they call home. How can you make a difference for the future of our oceans and their inhabitants? Here’s a few ideas: support local conservation organizations, choose sustainable seafood, use reef-friendly products, conserve water, practice safe boating by anchoring away from the reef, remove unwanted fishing gear from the ocean and dive and snorkel responsibly without touching the coral reef!