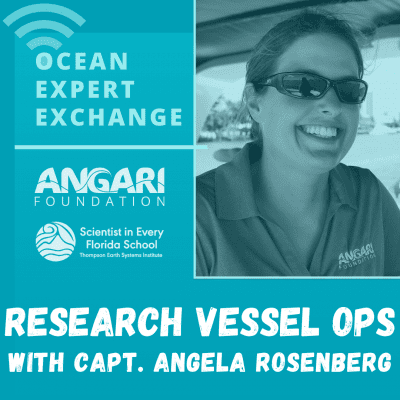 Angela Rosenberg combined her love for the ocean, marine science and boating to create ANGARI Foundation. She is the Foundation President and Captain of their 65-ft research vessel ANGARI that was repurposed for research under her guidance. Onboard research has included diverse areas of study, like sharks, turtles, coral reefs, fish, water chemistry, ocean currents and plankton. Angela has extensive knowledge and experience in boating and holds a U.S.C.G. Merchant Mariner 100 ton license and STCW and Marine Security credentials as well as several SCUBA certifications. Prior to ANGARI Foundation, Angela developed and implemented international scientific expedition, education and outreach programs for a Miami-based nonprofit that works with the yachting industry. Prior to this, Angela worked as a marine scientist conducting field and laboratory research related to shallow and deep-water corals, aquaculture, geochemistry, paleoceanography, climate change, ocean acidification, trace metals and seafloor mapping. Angela earned a M.B.A. from the University of South Carolina and a M.S. in Marine Geology and Geophysics and a B.S. in Marine Science and Biology from the University of Miami.