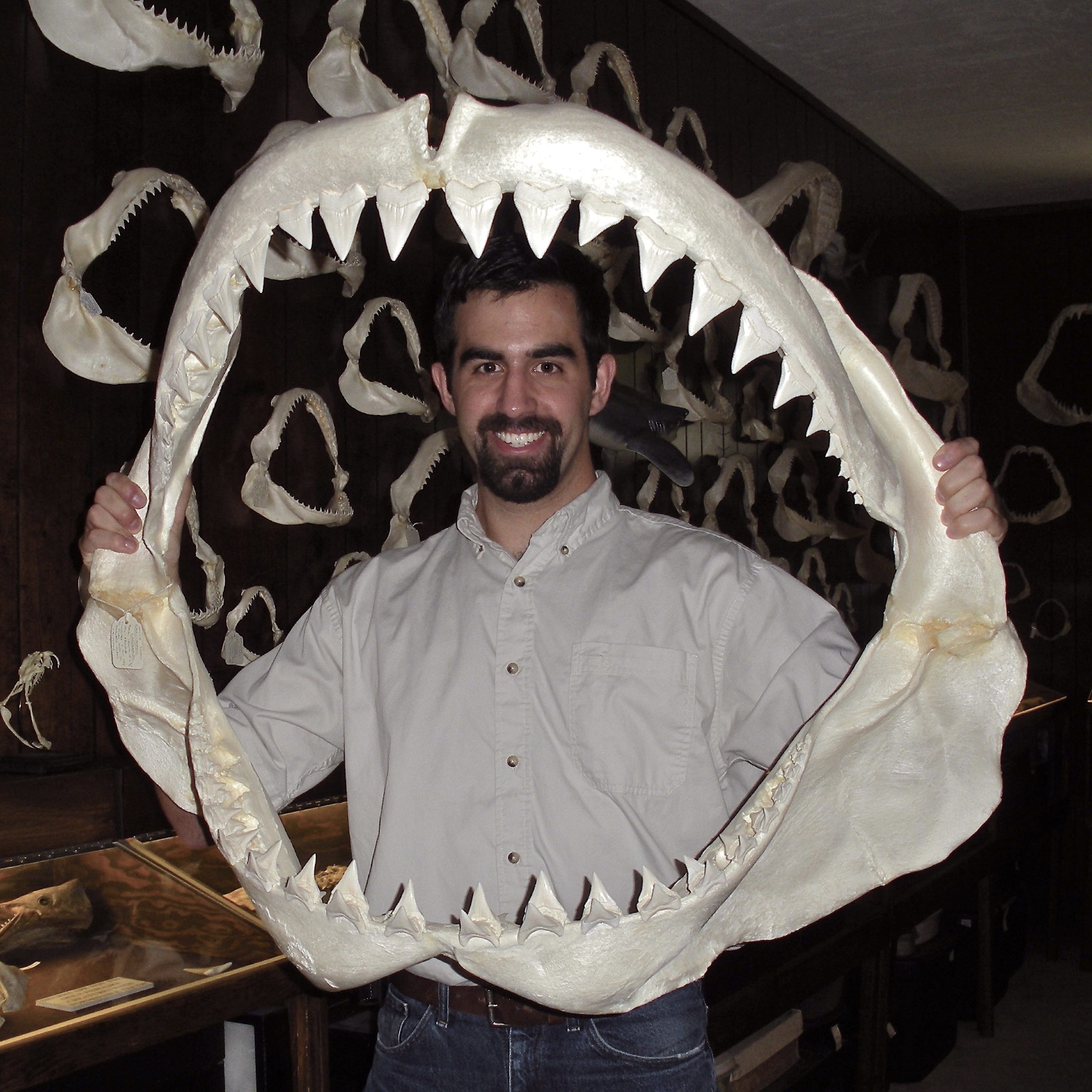 Here I am holding the jaws of a 19.5-foot white shark, Carcharodon carcharias, while visiting the collection of Dr. Gordon Hubbell. 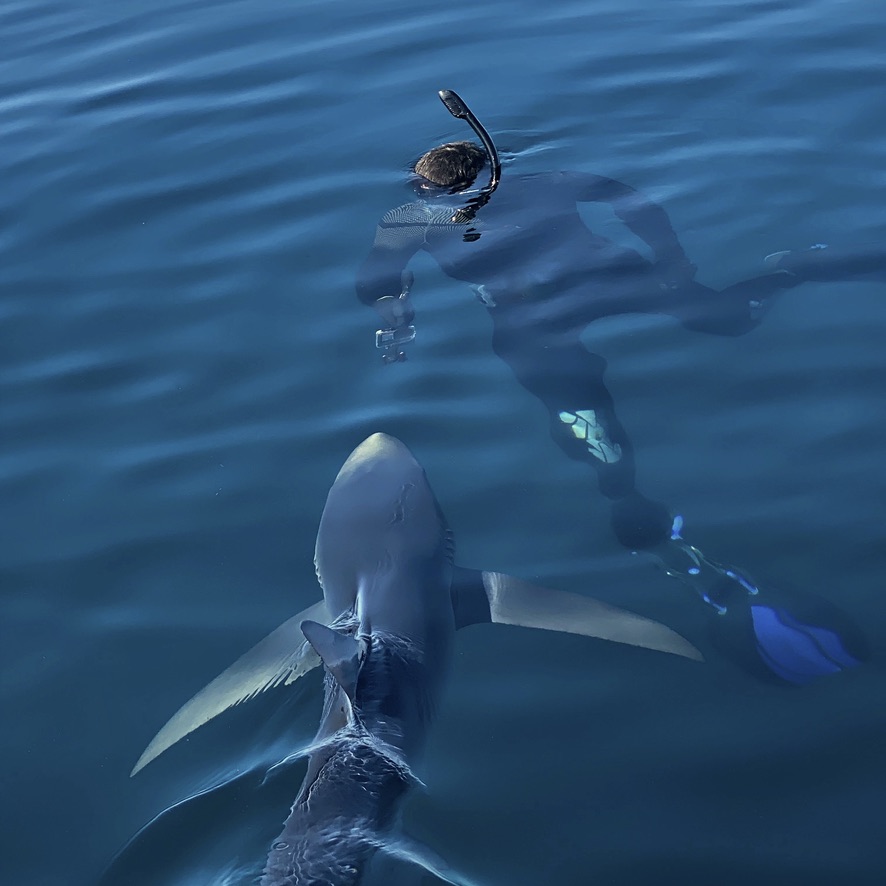 Filming a blue shark, Prionace glauca, as it swims past. PC: Joe Harrison. 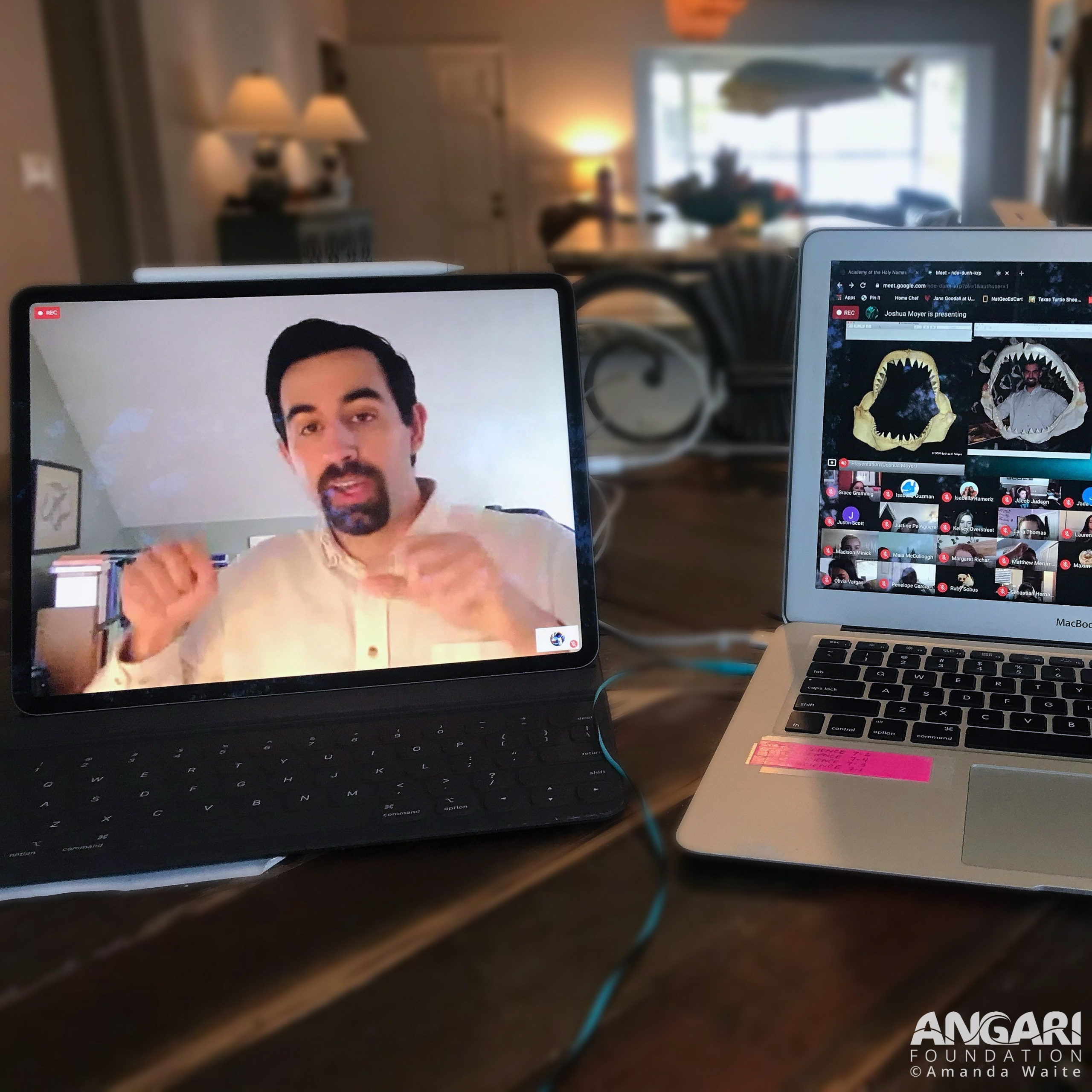 When I conducted a virtual classroom visit with students from the Academy of the Holy Names in Spring 2020. PC: Amanda Waite. 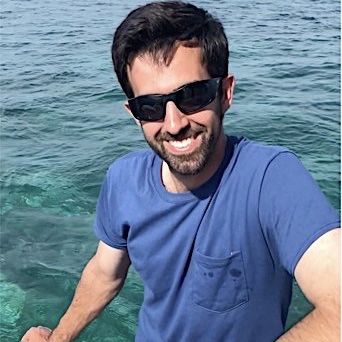 Aboard the R/V ANGARI while on Expedition 17. PC: Ken Morton. 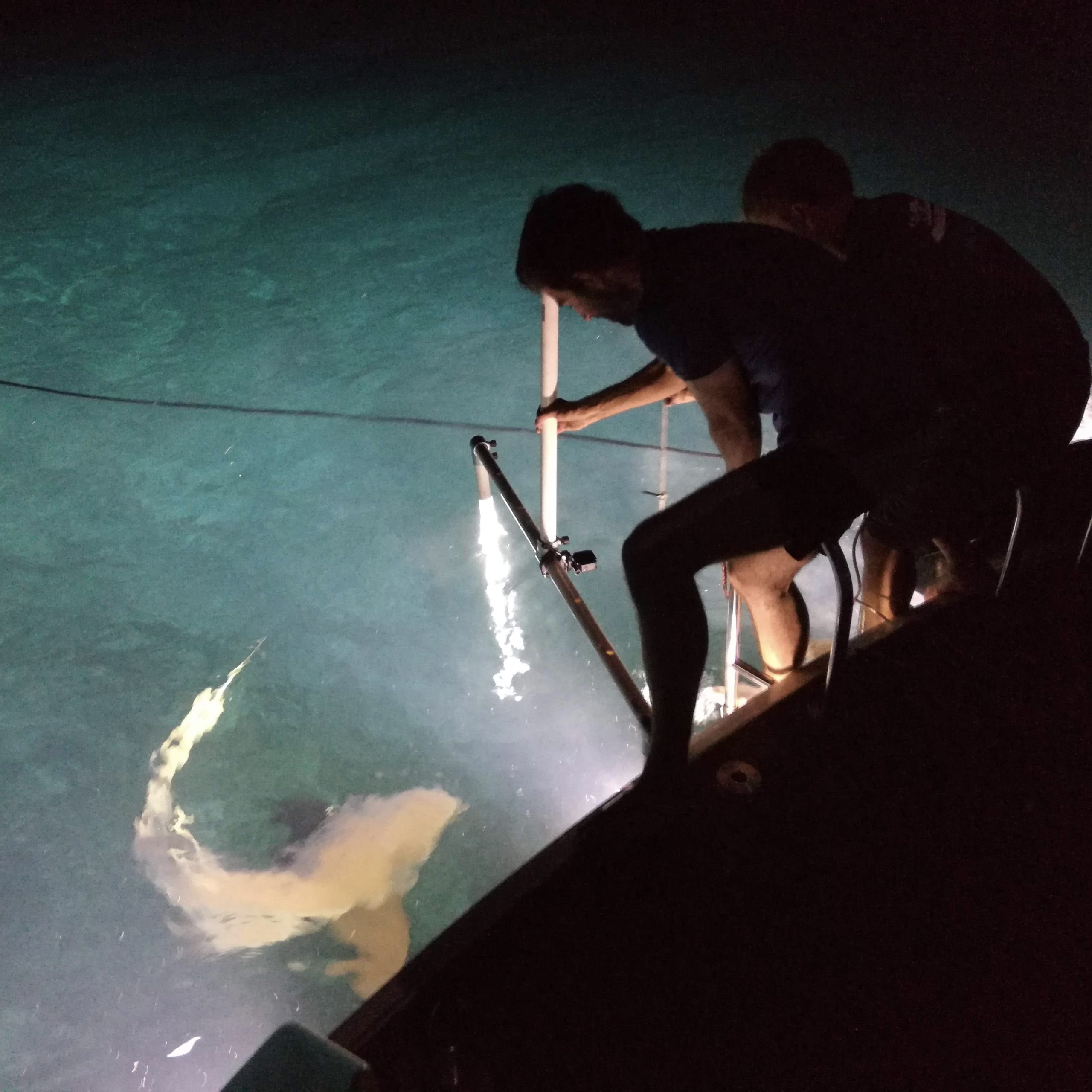 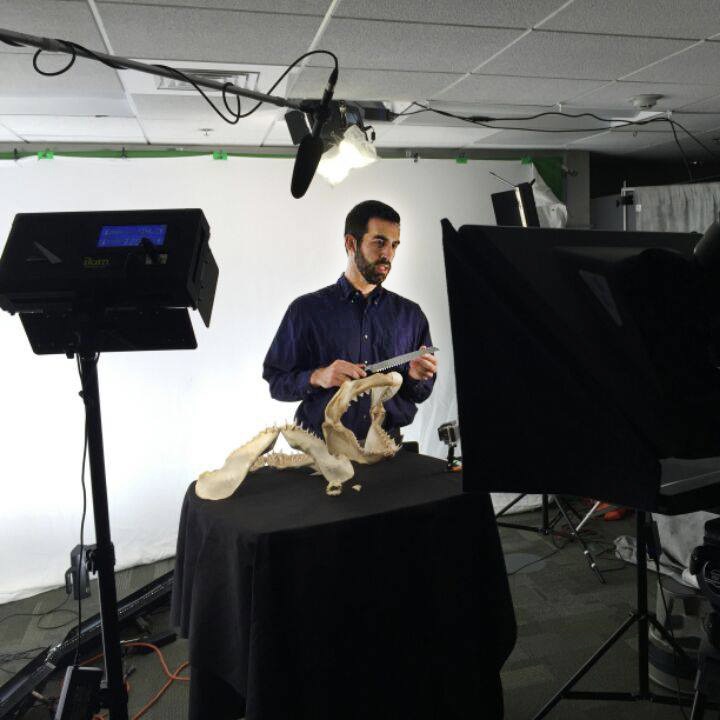 Recording a video about the form and function of shark jaws for the massive open online course (MOOC) on shark biology that I co-lead and has reached more than 35,000 students across more than 170 countries. 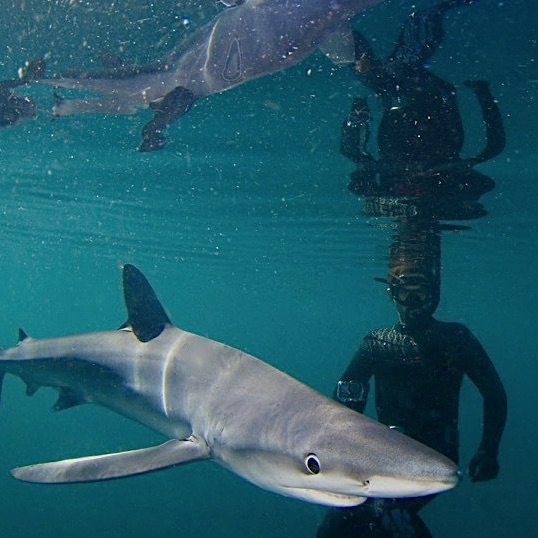 A blue shark, Prionace glauca, (foreground) gliding past me in the waters off Rhode Island. PC: Brian Raymond. 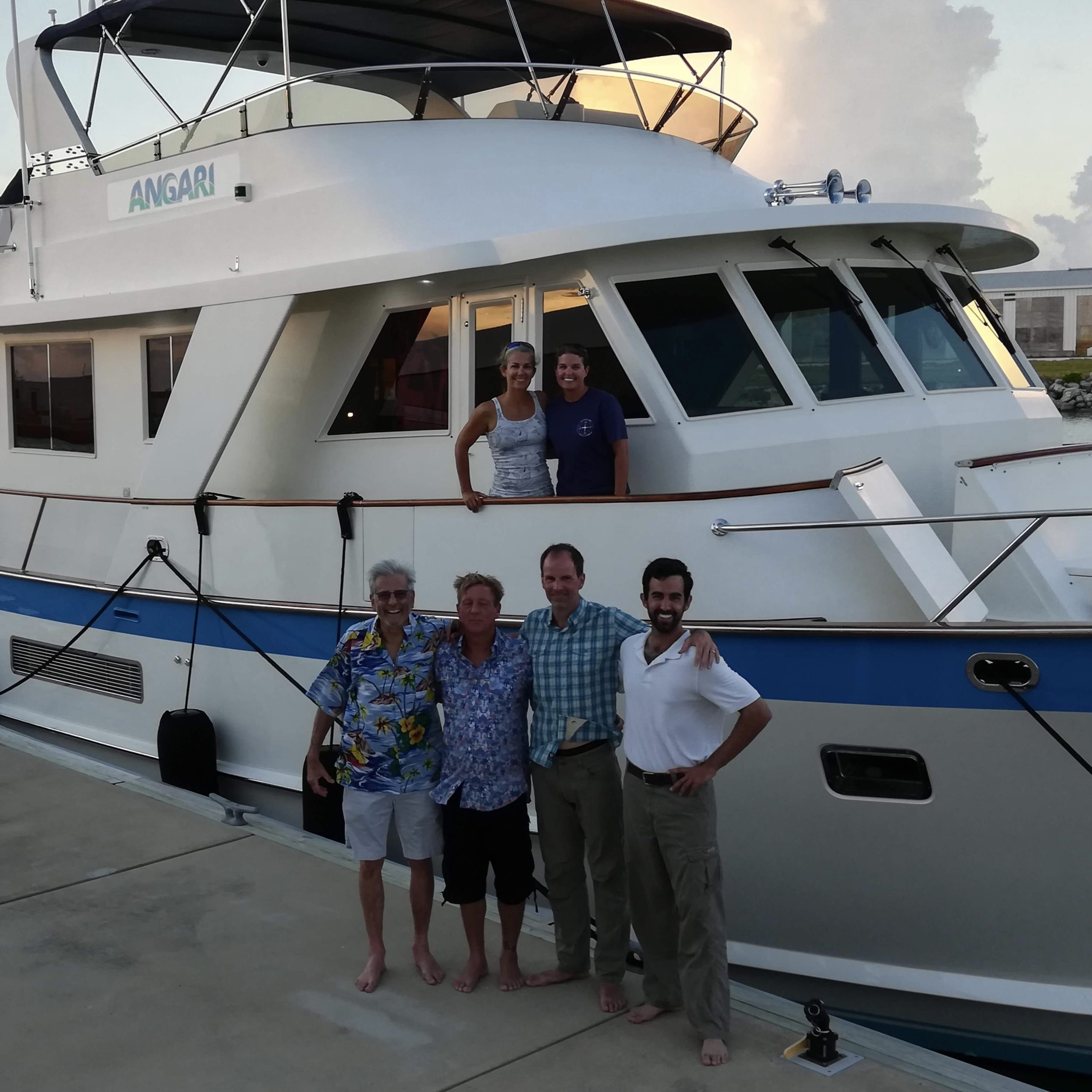 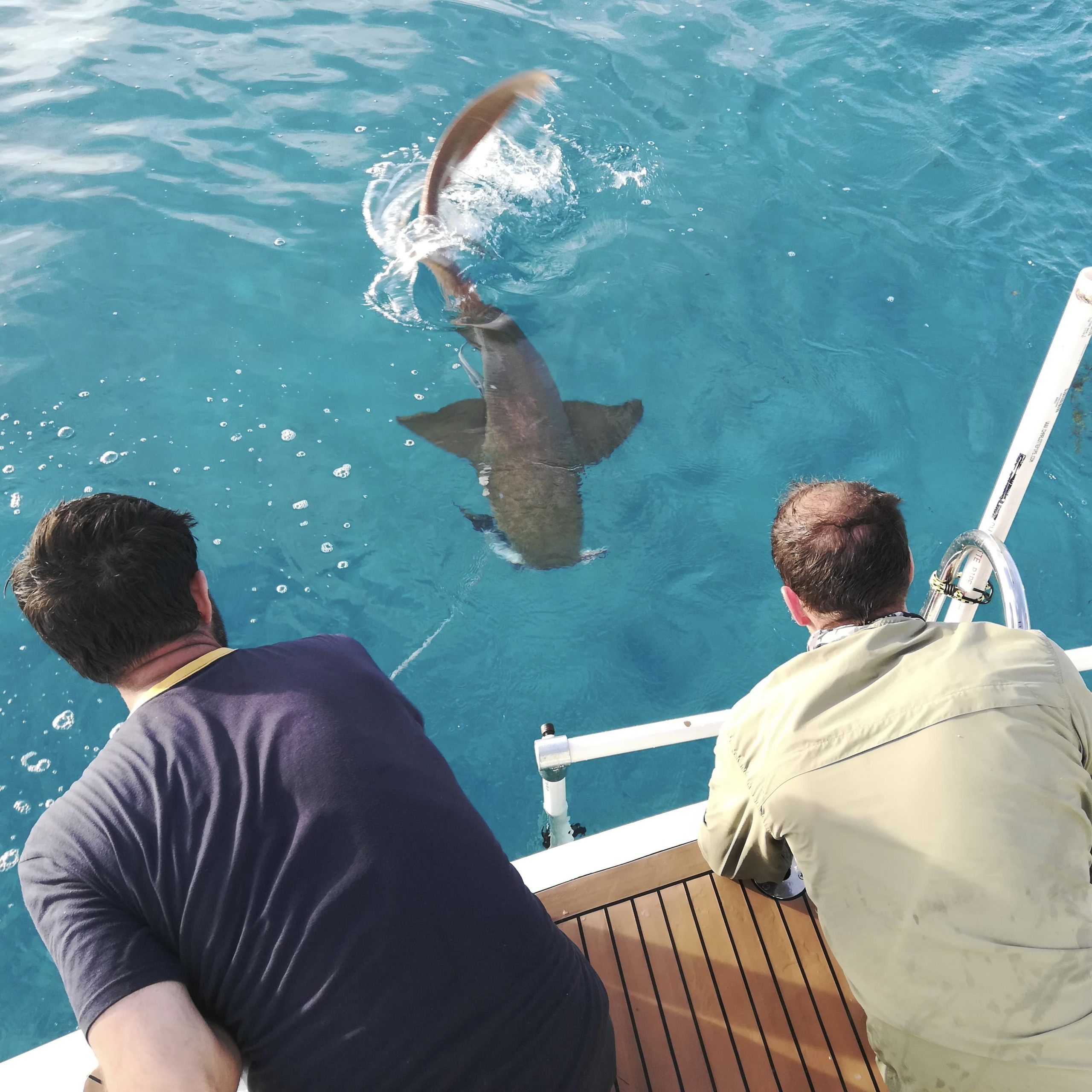 I am a biologist specializing in the ecology, behavior, and evolution of sharks and their relatives. My research interests include the comparative anatomy and ecological morphology of sharks’ jaws and teeth. My research includes a diverse array of methods and tools, such as computed tomography (CT) scanning, histology, and behavioral and kinematic analysis. I earned my master’s degree at Cornell University and my Ph.D. at the University of Massachusetts Amherst. I am currently a lecturer at Yale University in the department of Ecology and Evolutionary Biology where I teach courses in vertebrate anatomy and shark biology. I also serve as the Resident Research Scientist at the Atlantic Shark Institute, a non-profit organization supporting research on the many shark species of the Western Atlantic. Working with an international team of colleagues, I also serve as a lead instructor and co-developer of a free online course on shark biology that has educated more than 35,000 students from over 170 countries.

Get To Know Josh

Tell us a little about yourself. What is your background and how did you end up in your current position?

I grew up outside of Philadelphia, Pennsylvania, where my parents took me to the local library. They would encourage me to pick out a book that we could take home and read together. One day when I was 4 years old, I picked out a book about sharks, then another, and then another. My interest in sharks began there, and it carried me through high school and into college at Millersville University.

At Millersville, I was advised by Dr. Dominique Didier, who studied ratfish (cartilaginous fishes closely related to sharks). Dominique introduced me to her former advisor Dr. Willy Bemis. At the time, Willy was a professor at Cornell University and Director of Shoals Marine Laboratory. I spent several happy years working with Willy at Shoals and in his lab at Cornell, where I earned my Master of Science studying the comparative anatomy and evolution of sharks.

The work I did describing and comparing shark teeth and jaws left me with many questions about how sharks use these structures and whether anatomical differences relate to observable differences in performance. I enrolled at the University of Massachusetts Amherst to work with Dr. Duncan Irschick, who is a functional morphologist. I was surprised by how few shark species there were for which detailed feeding performance data existed. Stories and observations are great starting points, but to develop and test scientific hypotheses, you need data!

My master’s work exposed me to methods in comparative anatomy, systematics, and evolution. As a doctoral student I applied methods in the study of kinematics, statistics, behavior, and ecological morphology. As a result, I approach the study of vertebrate anatomy with a holistic and integrative perspective, which makes teaching comparative anatomy and shark biology courses at Yale such an enjoyable experience! It also has allowed me to collaborate with a wide variety of researchers as the Resident Research Scientist at the Atlantic Shark Institute.

What is your favorite shark? Why?

You never forget the first shark you see. It always holds a special place in your heart. As a little boy who spent hours running up and down the beaches of New Jersey, I often stopped to watch surf fishermen unhook and release smooth dogfish sharks, Mustelus canis. I started to ask the fishermen if I could release the sharks, and many of them agreed. I loved watching those graceful little sharks swim around my legs and out through the surf. They may not be the large sharks many of us think of when we hear the word shark, but they were the subjects of my first real shark experience, and for that, they will always be my favorite shark.

What are chondrichthyan fishes and why did you choose this field?

Chondrichthyan fishes have a skeleton made of cartilage covered by a layer of calcium prisms. So, we say that chondrichthyan fishes are fishes with prismatically calcified cartilaginous skeletons rather than bony skeletons. Over the last 400 million years there have been many kinds of chondrichthyans, but today, we have three: 1) sharks, 2) skates and rays, and 3) ratfish.

I chose to study chondrichthyans for two reasons. The first is that I grew up being captivated by sharks and the ocean, so studying chondrichthyan fishes was a logical choice for me. The second reason I study these fishes is that they represent an important chapter in the story of vertebrate evolution. If you think about animals being arranged on a giant evolutionary tree that shows you how they are related (like a family tree but much larger), then the branch on which you find sharks and their relatives is more than 400 million years old. That means we use sharks to understand evolutionary processes and to get a glimpse of many of the features common to our early vertebrate ancestors.

Why is shark bite data important to collect?

By comparing the jaws and teeth of different sharks, you can spot anatomical differences. Based on how those sharks are related and the differences you observe, you may be able to come up with hypotheses explaining why body parts, like the teeth or jaws in one species, evolved to be different than the same body parts in another species. But hypotheses need to be tested!

One way to test that kind of hypothesis is to study how sharks use their body parts to do something that is ecologically important. Feeding is a great example because sharks use their jaws and teeth to capture food, and what sharks eat and how effectively they do that has major impacts on the shark’s survival as well as the behaviors and populations of the shark’s prey species. We refer to the actions and behaviors associated with feeding as feeding performance.

What drives you/keeps you inspired?

There is nothing like the sense of awe I experience when I hold a 5-million-year-old shark tooth as big as my hand or when I watch a 300-pound bull shark glide past. Those experiences captivate and energize me and make the little boy inside me quite happy. Beyond that, I also take pleasure in watching my friends, family, colleagues, and students get to experience those sorts of feelings. When they are excited, I am excited, and that feeds my passion for the work.

What do you like to do in your spare time?

When I’m not studying sharks, I enjoy fencing. I have experience in all three weapons (foil, saber, and epee), though I’m an epee fencer at heart. I also enjoy traveling with my wife, going on kayaking day trips, and watching classic movies and documentaries.

What has been the most unexpected thing you have learned during your research?

Research can be a personal growth experience, and that means that sometimes the most unexpected thing you learn is something about yourself. Sometimes a researcher needs to learn a new methodology or technique that forces them to develop a side of themselves that they didn’t know they had. For example, my research in comparative anatomy required me to learn digital photography and illustration techniques to depict the specimens I was describing. Part of how my advisor and I communicated our findings to others was through short, informational videos included in our online shark biology course. That exposed me to concepts in cinematography and video production, which continue to fascinate me and have given me a new appreciation for nature-based storytelling and filmmaking. I never knew how much I enjoyed those things until my research forced me to familiarize myself with them.

How has science changed your life?

Science is more than a collection of facts. It’s a way of looking at the world. Science is about observing, questioning, testing, and learning. Cultivating a scientific outlook and practicing the scientific method will change you as a person. It forces you to engage with the world around you. It forces you to develop flexibility, creativity, and awareness. It forces you to ask yourself how you “know” whether something is true. And that can have profound impacts on your life.

What advice would you give to someone wanting to become a research scientist?

Read, reflect, and read again. Louis Pasteur said that chance favors the prepared mind. Reading what has been studied, reflecting on how it relates to what you observe, then reading related material with follow-up questions is a great way to prepare your mind as a scientist. And always keep your eyes open – you never know when you’ll observe something you want to read about as the first step in a new research project.

What do you hope to achieve during your career?

More than anything else, I hope that I can use my passion to inspire others. I hope that when students and colleagues reflect on my work and career, they will see just how far enthusiasm, perseverance, and creativity can take you. If they see that, and it gives them an uplifting sense that they too can accomplish something important to them, whether it is in the field of shark biology or beyond, then I’ll consider my career time well spent.

Read more about other marine professionals who are committed to ocean science and conservation.