Students and teachers from Jupiter Environmental Research and Field Studies Academy worked side-by-side with Florida International University scientists onboard R/V ANGARI for a day of shark research in the Lake Worth Lagoon.

Scientists from Florida International University’s College of Arts, Sciences and Environment were joined onboard R/V ANGARI by students and teachers from the Jupiter Environmental Research and Field Studies Academy (JERFSA), a four-year magnet school program at Jupiter Community High School, to participate in our Coastal Ocean Explorers: Sharks program. The students and teachers worked side-by-side with scientists to practice methods used by researchers to study sharks, including baited remote underwater video systems (BRUVS) and handline and drumline fishing in the Lake Worth Lagoon. Academy participants were given the full experience of being field scientists for the day, including dealing with changing weather and retrieving research gear in the pouring rain, which only added to the excitement of the day!

The JERFSA students were an integral part of the entire research process, assisting in the set up, deployment and retrieval of the fishing gear and BRUVS. BRUVS are a non-invasive research method used by scientists around the world to study sharks, rays and other marine life living in a particular area. The BRUVS has a camera and bait box mounted to a hard frame that is placed on the seafloor. Using the footage collected, scientists are able to estimate marine life abundance, study behavior and assess diversity of species in the region. After recovering the BRUVS, the students and teachers were able to review the video footage in R/V ANGARI’s indoor lab. They worked in teams to practice their species identification skills and were ecstatic to discover they had captured video of a curious nurse shark investigating the bait cage.

With the help of the FIU scientists, the participants also assembled, deployed and recovered three drumlines at one of the study sites. This specialized shark fishing research equipment is designed to allow a shark to swim freely in its environment after being hooked, which minimizes stress on the animal before its quick workup and release. Handlines were also deployed; however, nothing was caught using either the drumlines or handlines on this expedition.

This expedition was supported by the generous donors of ANGARI Foundation. 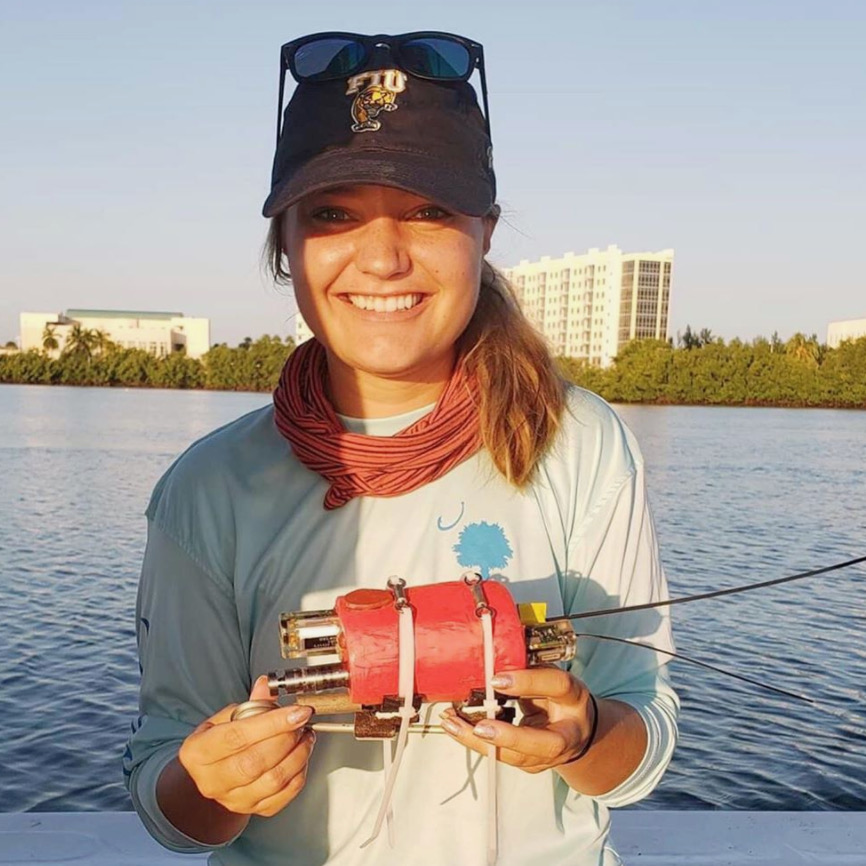 Erin Spencer is a science writer, marine ecologist and Ph.D. candidate in Biology at FIU. Her research uses biologgers, or animal-mounted data collecting devices, to record acceleration, speed, depth, etc. that helps us understand great hammerhead shark energy needs and movement patterns. Prior to working in Florida, she received a M.S. in Ecology from the UNC – Chapel Hill where she studied red snapper fishery management and seafood mislabeling, and a B.S. in Ecology from the College of William and Mary where she studied invasive lionfish management. She is a three-time National Geographic Explorer grantee and has given talks to groups of all ages through National Geographic, the World Bank, TEDx, and schools. Erin is an avid writer and published a children’s book called The World of Coral Reefs. She is also passionate about science education and serves as a lead scientist for ANGARI’s Coastal Ocean Explorers: Sharks program aboard R/V ANGARI.