As part of our Coastal Ocean Explorers: Sharks education program, we invited students and teachers from Roosevelt Middle aboard R/V ANGARI to learn from and work with scientists from Florida International University College of Arts, Sciences & Education to study local sharks in support of ongoing research projects. Throughout the day, students were able to participate in all aspects of the research process, from baiting circle hooks, to assembling, deploying and retrieving specialized fishing equipment known as drumlines. The students helped scientists study the sharks, including collecting length measurements, dorsal fin tissue samples and attaching a unique numbered tag to identify the individual if it is ever caught again.

The team was lucky enough to catch and release two great hammerhead sharks on which they deployed biologgers to collect information on the animal’s speed, acceleration, depth and more. The biologgers are designed to release from the shark’s dorsal fin after 24 hours at which time they float to the surface where they can be retrieved using satellite and VHF signals.

A total of five sharks were caught, including three great hammerhead sharks and two lemon sharks. One goliath grouper was also caught and released from a drumline during the expedition, which was a first for R/V ANGARI and her crew. It was a full day of scientific research and excitement!

This expedition was made possible by IJL Real Estate and the West Marine BlueFuture® Fund at Community Foundation Santa Cruz County. 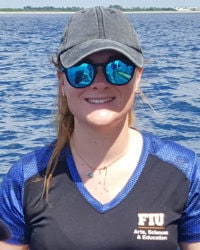 Laura García Barcia is a Ph.D. candidate in the Predator Ecology & Conservation Lab at Florida International University. She is an environmental biologist particularly interested in marine wildlife conservation. Her research focuses on two main topics: the shark fin trade and the impacts of heavy metal pollution on coastal shark species. Through the use of genetics and toxicology, she explores fascinating questions, including the identification of where shark fins sold in Hong Kong come from, whether shark fin soup is a safe product to consume for humans, or at what life stage sharks are more vulnerable to pollutants found in our waters.

The ultimate goal of Laura’s research is to inform conservation measures that help improve the status of shark populations. Working towards this same goal, Laura is passionate about education and serves as the lead scientist and mentor for ANGARI’s Coastal Ocean Explorers: Sharks at-sea education program aboard R/V ANGARI. The program enables youth and educators to work side-by-side with FIU researchers to study sharks offshore Palm Beach County.