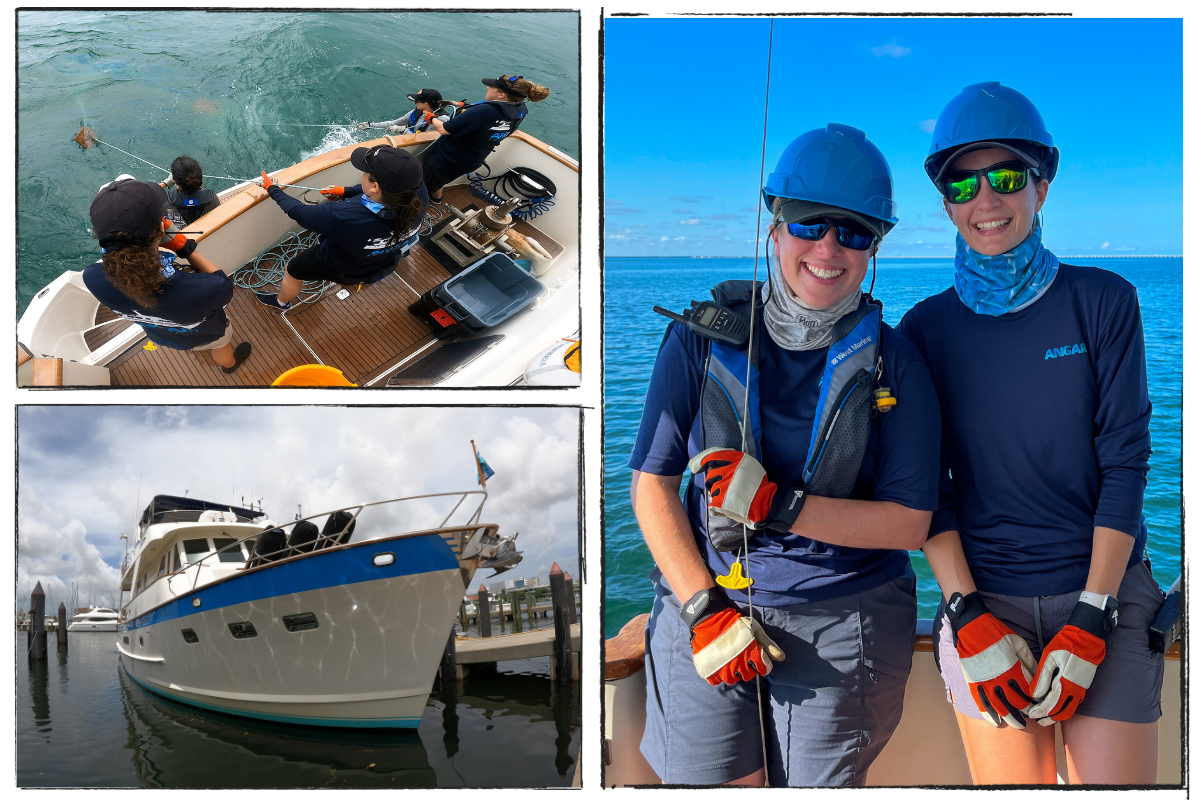 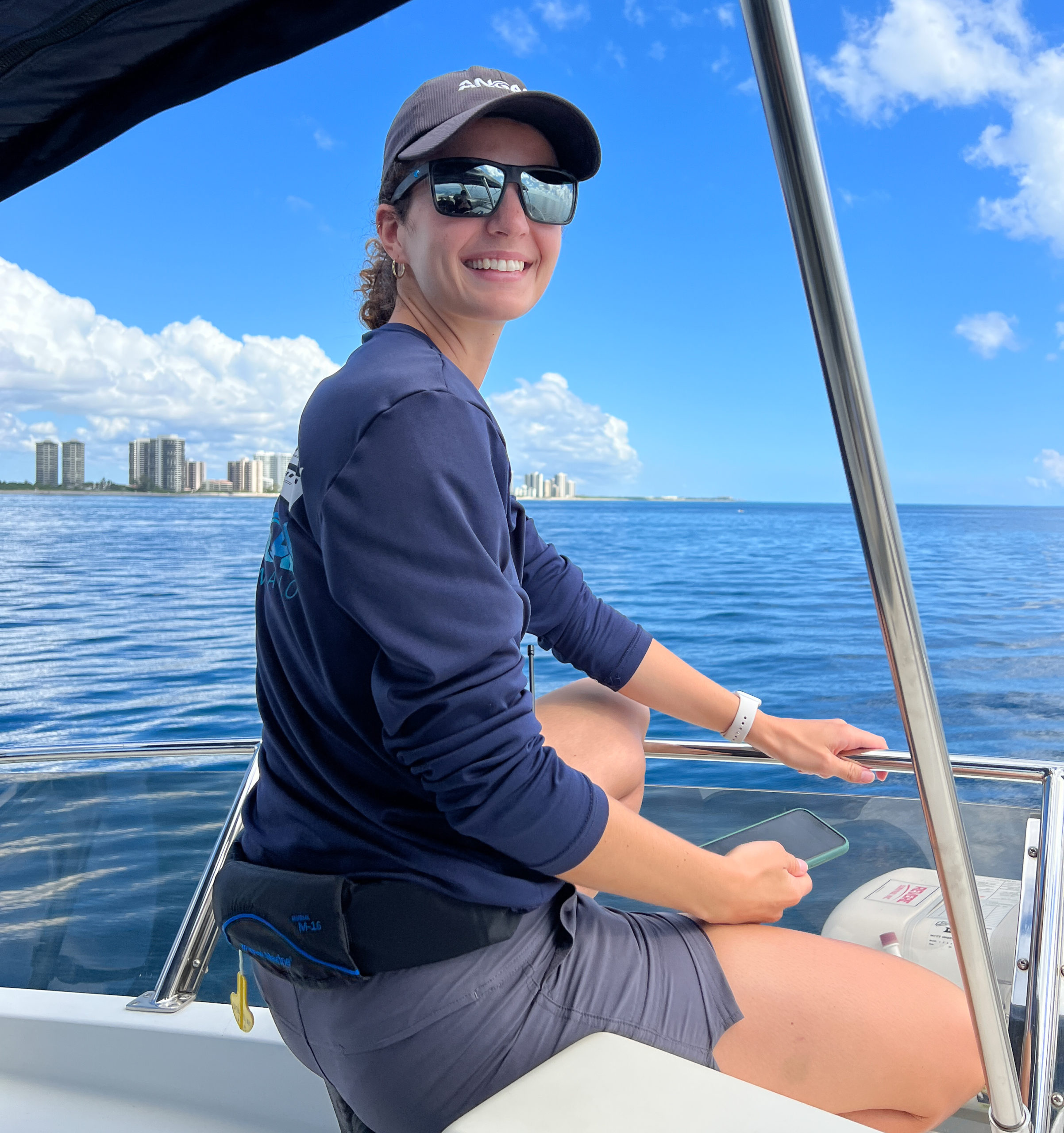 As an ANGARI intern, my responsibilities have been broad, from assisting with vessel operations, to media marketing and education outreach. This means in the morning I could be assisting Captain Kevin with a varnishing project on the boat and be in the office after lunch drafting a webpage summary from a recent expedition. I really enjoy the diversity of tasks involved with working with a small team. No two days are ever the same!

Of the expeditions that I have been lucky to take part in as an intern, one that stands out to me was this year’s Oceanography Camp for Girls. On an expedition like this, proper planning is paramount. In the weeks leading up to the expedition, safety gear is inspected, the vessel is refueled, engineering systems are checked and the galley is provisioned with enough food to last the entire trip.

It was a five-day journey from West Palm Beach, through the Keys and north to reach St. Petersburg, Florida with overnight stops in Miami, Marathon and Naples. The transit days were long and began early, dropping lines or pulling anchor just before sunrise around 6am. On those days, when not on watch at the helm, I got ahead on computer work and enjoyed the scenery most of all. We were lucky to have some of the best weather possible for being out on the water! The ocean was flat for much of the trip, except when we waited for tropical storm Alex to pass in the Keys. Occasionally dolphins would play in our wake or flying fish would soar out from under the bow. One of my most memorable moments from the trip was watching the sunrise from the flybridge of R/V ANGARI as we passed under the Seven Mile Bridge. Once we arrived in St. Pete, the lab was set up with microscopes, research equipment was stowed on deck and we were ready to welcome aboard the campers!

The University of South Florida College of Marine Science’s Oceanography Camp for Girls is a unique three-week summer camp experience offered to rising 9th grade girls in Pinellas County to provide them exposure and hands-on experience in STEM fields, which often have poor representation of women and minorities. ANGARI’s role in the camp is to host the research cruise which allows campers to practice oceanographic field methods. On the research cruise days, three different sites were visited within Tampa Bay where samples and data were collected using a variety of methods. Throughout the day, the girls rotated between different stations set up around the boat. At the water sampling station, the campers used R/V ANGARI‘s davit to lower a Niskin bottle into the water. At the desired depth, a weighted messenger is then dropped down the line which triggers the bottle to close. The collected water samples were then analyzed for nutrients like dissolved oxygen by campers in the indoor wet lab station. This replicates real methods used by oceanographers in the field, which was a new experience for me just as much as the campers! At another station participants gathered environmental data from the atmosphere and water using a variety of tools, including shipboard instrumentation, anemometers, a YSI probe and Secchi disk.

During the cruises, I also assisted the young scientists and mentors in the deployment and retrieval of a plankton net and Shipek grab sampler. The latter is lowered to the seafloor using the vessel’s davit, where it springs closed to collect a sediment sample. We ended the research cruise days with ice cream and an exciting otter trawl (sometimes in the pouring rain)! It was a joy to see the girls huddled around the specimen containers observing and documenting fascinating creatures gathered from the seafloor like sea urchins, scallops, sea robins and my favorite, decorator crabs.

The most rewarding part of the camp was interacting with the girls and serving as a role model to show them that they too can enter male-dominated fields like marine science. Working in boating and STEM as a female can be discouraging at times, so being a part of the camp was a gentle reminder to myself to not doubt my abilities and continue to have the confidence to pursue my career goals.

Watch the video from Expedition 46 here.

Lydia grew up in upstate New York where she attended SUNY-ESF. She graduated in 2020 with a B.S. in Conservation Biology and minors in Marine Science and Environmental Writing. While in school she had the opportunity to circumnavigate the globe with Semester at Sea, assist in research on the queen conch in Belize and learn how to research dive in the Dutch Caribbean while living on a sailing catamaran. After graduating, Lydia worked as a mate in The Bahamas for an 85-foot private yacht. She is excited to utilize her boating skills and background in marine conservation onboard R/V ANGARI as a deckhand while supporting the Foundation’s education and community programs.

Working and Living Aboard a Research Vessel

By Erik Phillips - Fall 2021 Intern For two years, I was a Computer Science…